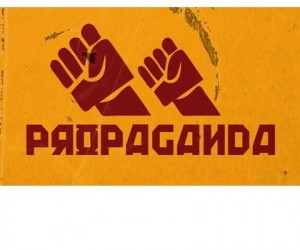 A Fraud: The so-called Constantine Creed

A quick note to express my gratitude to Roger Pearse, who has exposed the increasingly popular fraud called the “Constantine Creed”.

This creed is available on countless websites around the Internet. When I was referred to it, right away suspected that it was bogus and went looking for any kind of credible source for it, or story as to its origins. I eventually found this blog site: Hunting the wild (mis)quotation

I recommend popping over there and having a look at Roger Pearse’s work. In brief, he found where it comes from, and it most certainly is not from Constantine, as so many people claim.

In fact it is from some later time, Pearce says from medieval Greece. The quotation circulating on the Internet has had vital parts snipped from it, which Pearse reconstructs, to demonstrate that it is simply a profession of faith for Jews who converted to Christianity.

The wording of it makes plain that there was some enmity between certain Christian and Jewish communities, which is consistent with each proselytising the other. The fully reconstructed denunciation of one, and submission to the other, is therefore (with the parts in green restored by Pearse) rendered:

“I renounce all customs, rites, legalisms, unleavened breads & sacrifices of lambs of the Hebrews, and all other feasts of the Hebrews, sacrifices, prayers, aspersions, purifications, sanctifications and propitiations and fasts, and new moons, and Sabbaths, and superstitions, and hymns and chants and observances and Synagogues, and the food and drink of the Hebrews; in one word, I renounce everything Jewish, legalism, custom and rite; and above all he who is expected by all the Jews in the shape and dress of Christ, I renounce Anti-Christ, and join myself to the true Christ and God.  And I believe in the Father, the Son and the Holy Spirit; the holy and consubstantial and individual Trinity; I profess the dispensation where one of the holy trinity, the Word of God took flesh and became man; … if I pretend to be a Christian and return to Jewish superstition, or shall be found eating with the Jews, or feasting with them, or secretly conversing and condemning the Christian religion instead of openly confuting them and condemning their vain faith, then let the trembling of Gehazi cleave to me, as well as the legal punishments to which I acknowledge myself liable. And may I be anathema in the world to come, and may my soul be set down with Satan and the devils.”  – Pearse

The original text is: 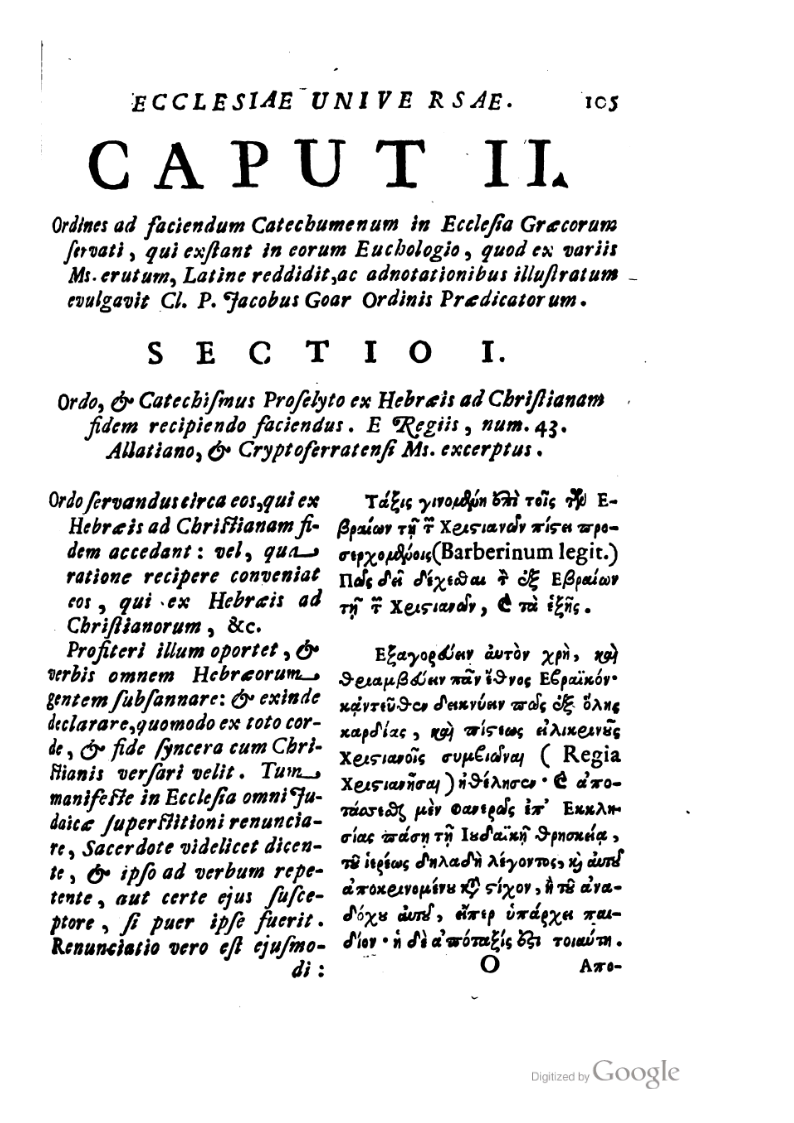 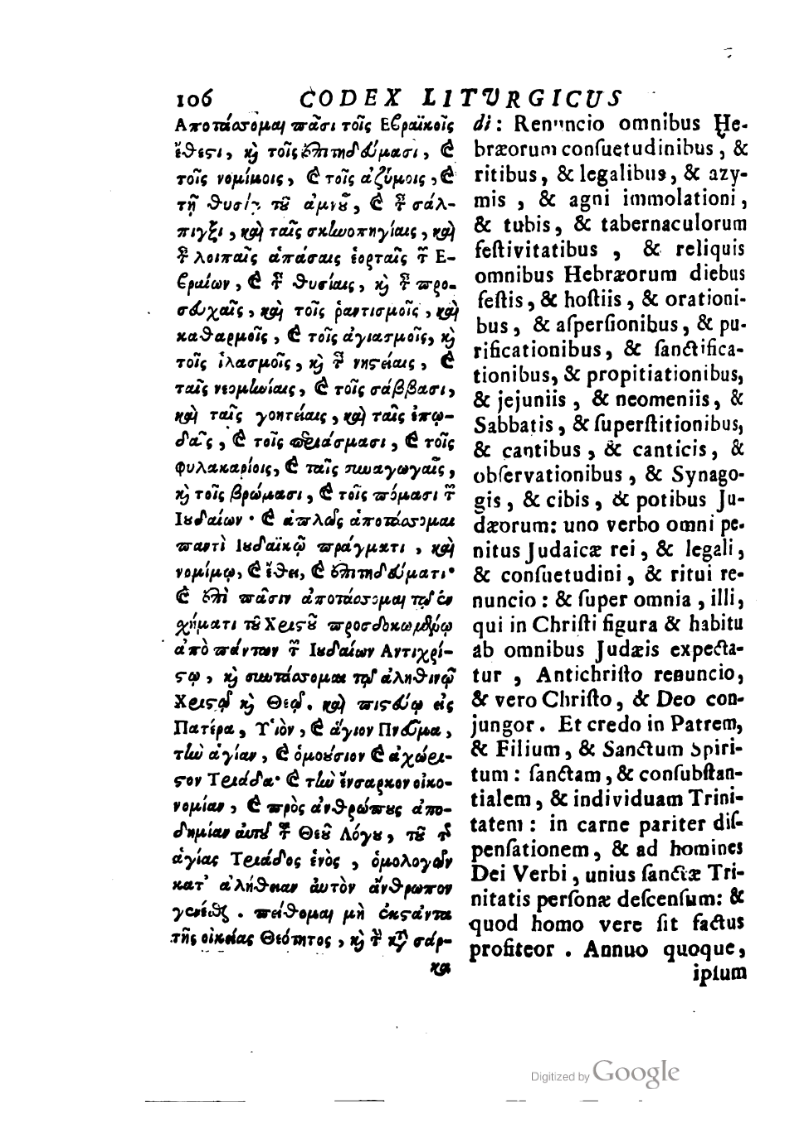 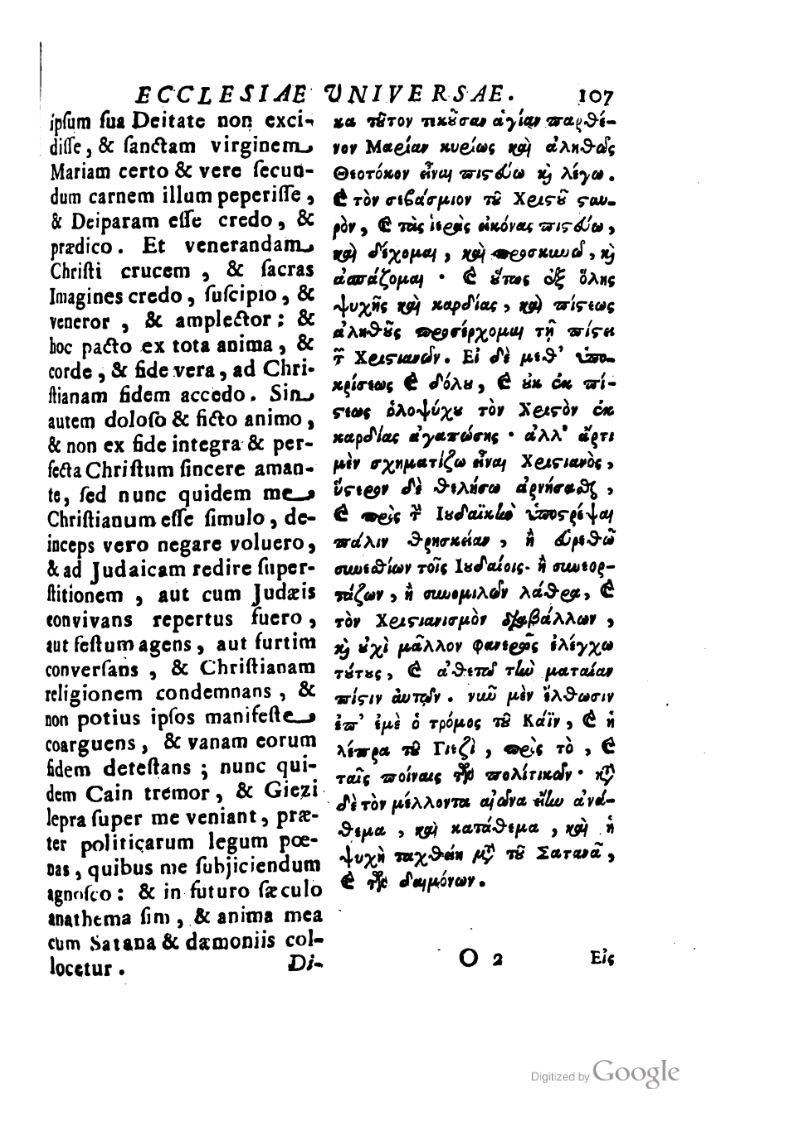 The mis-quote is normally used in an attempt to imply that Constantine was anti-Semitic, and turned the Christian faith into something anti-Jewish, none of which is true. Constantine could not have cared less whether Christians were eating unleavened bread, for example. What he cared about was people fasting during a celebration.

The Reason for such “anti-Semitic” Creeds

Of course, these days when we say, “anti-Semitic”, we mean a persecution of Jews. That’s not what this creed is. But it is anti-Jewish. That really bothers some people, but it needn’t, if we understand its context and purpose.

In a situation where a Christian community is interacting with a Jewish one, and each is proselytising the other, there comes a need for clearly denouncing the one when converting to the other. One can well imagine that the Jewish community had equally scathing denunciations of Christian claims, like the divinity of Jesus, the Resurrection, the absence of Mosaic regulations, and so forth. We can even surmise from this confession that the key elements would have been the doctrine of the Trinity, phrases like “true Christ”, and the incarnation of Christ.

Not only is it clear from this creed that the Christians were required to renounce Judaism, but also it seems that some people had “pretended” to be Christian, and had gone back to joining the Jewish community. This is how creeds develop – additional parts are added to accommodate new situations. The wording is always very deliberately designed to counter specific claims and practices.

What is not at stake here, is the Jewish history of Christianity. This is an argument between a Christian community and their contemporary Jewish neighbours, some time in middle history. From some of the very earliest times of the Christian Church, the Jewish community was persecuting Christians (Acts 8:1). When Christian groups became strong (particularly when Christianity became the official religion of the Roman Empire), there was persecution in the opposite direction, too. It came in response to Jewish missionaries attempting to convert Christians to Judaism.

Theologically, however, Christianity is a joining of Jews with Gentiles, under God. Christians have never had any theological reason to persecute Jews.

So then, remember that at one time you Gentiles by birth, called ‘the uncircumcision’ by those who are called ‘the circumcision’—a physical circumcision made in the flesh by human hands— remember that you were at that time without Christ, being aliens from the commonwealth of Israel, and strangers to the covenants of promise, having no hope and without God in the world.

But now in Christ Jesus you who once were far off have been brought near by the blood of Christ. For he is our peace; in his flesh he has made both groups into one and has broken down the dividing wall, that is, the hostility between us. He has abolished the law with its commandments and ordinances, so that he might create in himself one new humanity in place of the two, thus making peace, and might reconcile both groups to God in one body through the cross, thus putting to death that hostility through it.

So he came and proclaimed peace to you who were far off and peace to those who were near; for through him both of us have access in one Spirit to the Father.

So then you are no longer strangers and aliens, but you are citizens with the saints and also members of the household of God, built upon the foundation of the apostles and prophets, with Christ Jesus himself as the cornerstone. In him the whole structure is joined together and grows into a holy temple in the Lord; in whom you also are built together spiritually into a dwelling-place for God.

Why does it come up?

I have seen this misinformation in connection with groups who insist that Christians should be observing the Covenant of Moses. They claim that the Christian Church was hijacked by Constantine, who turned it into an anti-Semitic corruption of original Christianity.

Of course, that’s just silly. Judaisers were trying to get Christians to be circumcised and observe Moses from the beginning, and Paul’s ministry has this battle as its most prominent theme. The Book of Acts clearly tells the story of Paul and Peter each bringing their reflections on Gentile ministry back to Jerusalem, and the Christian elders there issuing an edict that believers will not be required to submit to the Mosaic Covenant.

Paul’s ministry was constantly working at bringing peace between those who were Jewish and those who were not, within the church. His work continues today, when people start trying again to insist that somehow, a Christian is bound to the Mosaic Covenant, and therefore becomes Jewish.

Fortunately Paul has left us with ample tools to prove that wrong and to promote peace between Jew and Gentile instead, as God had always intended. Blessed are the peacemakers.