… and this just in: News from the Streets of Ipswich. Issue 15 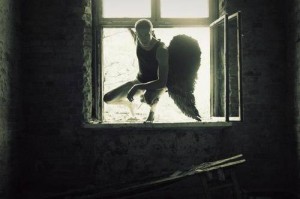 Everything he said was in rhyming couplets. He had angel wings tattooed across his back. He was unpredictable. Almost certainly he was affected by methamphetamine or similar.

I was introduced to this man and as we spoke he gave me a pillowcase (with pictures and icons from Disney’s “CARS” movie), and a wrist band that he had made.

I was captivated by his penchant for rhyming couplets, which seemed generally to be a subconscious thing, like a verbal tic of sorts. Clearly his mind was incredibly agile.

Later I saw him again and he was wearing nothing but his underpants. He was a little anxious, clearly mindful of the fact that everyone was wary of him. I walked up to him and greeted him warmly. I could see the relief on his face.

He gave me a paperclip that he had folded into the likeness of a heart. It was literally everything he had.

This man, clearly a little confused though he was, was living-out his deepest self-knowledge. He is a giver. He is a lover of people. He is generous. He is kind. He would, and did, give the shirt off his back, at some stage in the day.

This is the kind of heart that God is seeking. I assured him of that.

Would we know an angel if we met one?

“Do not neglect to show hospitality to strangers, for by doing that some have entertained angels without knowing it.”