… and this just in: News from the Streets of Ipswich. Issue 8

Services for the Street Community – is funding flowing again?

Services for the Street Community – is funding flowing again? 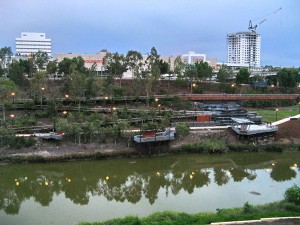 I was in Ipswich when the following happened. I was so amused by it that I posted it on facebook. I had no idea it was going to be so encouraging to so many people! I figured I would put it in one of these “from the streets of Ipswich” blog posts, so that it is kept alongside all the other stories.

ROFL.
Fella steals my bag. It’s basically full of Bibles.
Someone brings it back to me, apologising for him. I say, “Don’t worry about it. Does he need a Bible? He can have one.”
She says, “Yeah, he kept one”.
I say, “Well then, God bless him”.
Later she comes back with the Bible.
Later still I spot the guy, and give him the Bible. He starts talking about faith.
I love this crazy town.
‪#‎nowhereidratherbeontuesdays‬

We were down on the Riverwalk (pictured above), with the PCYC who have started a program to sign people up, and do day trips with them (kudos).

The guys from the PCYC had rocked up in town, gathered a bunch of the locals with the promise of a feed and throwing a footy around, and had taken the small crowd down to the Riverwalk. I was talking to a young couple who was heading down there, so I followed.

We all had some hot chicken and lettuce on bread rolls, then threw a footy. When the food was gone, so were many of the people. And my bag. And the tongs, apparently, and the hand sanitiser too…

I had already shared with the guys who were left that I was hugely amused that someone had made off with a bag of Bibles, when one of the ladies came back with the bag, and the above conversation ensued. This prompted the PCYC guys to ask about who I was and what I was doing. (Unfortunately I haven’t got very articulate answers to either of those questions, but they could see that I knew most of the people around the place)

I hope I’ll be blogging more about what I see the PCYC doing, particularly since they intend to do it on Tuesdays. The community remembers a decade or so ago that the PCYC used to run day trips, help people get drivers’ licenses, and all sorts of other community assistance programs. The funding long since dried up for those programs so I don’t know where the money is coming from for this initiative but I think it’s great. Perhaps some new funding streams have opened up.

Whilst it’s true that such programs are only useful while the money is flowing, and have nothing to offer otherwise, it is still a good thing that the programs are available. If there’s one thing that helps particularly the young men to be distracted from destructive behaviour, it’s football. The guys from PCYC will give the guys something constructive to do, and that’s always positive.

There’s a hope and a future for this town. When they’re playing football, sometimes people can even believe it. May they see past the football to things that actually last.