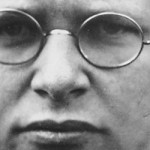 Bonhoeffer – A scholar, a gentleman, a rebel, a martyr.

What did Dietrich Bonhoeffer think he was doing?

Bonhoeffer had much to say about discipleship, and was also a vocal critic of the Lutheran Church’s inaction against the Nazis. Was he just a busybody with opinions about everything? No, he had a view of discipleship that applies as much to the church as a whole, as it does to individual Christians. Welcome to one of my heroes… 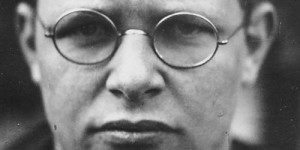 The legacy of Martin Luther, the founder of the Lutheran church in the 16th century, must have seemed to be commending Nazism during the early days of Hitler’s rise in Germany from 1920 onwards. Luther’s writings were highly revered, to the point where, “He acquired the status of a prophet within Germany”.[1] They included powerful anti-Jewish ideas as well as pro-German nationalistic fervour, along with other ideas evident in Nazi thinking, “Indeed,” Gonzalez says, “many [Protestant liberals] had declared that they believed in the perfectibility of the human race, and this was precisely what Hitler proclaimed.”[2]  In addition, Luther pursues a model of the national church which was being interpreted as placing it outside of the civil political processes of the nation. Luther’s legacy was therefore used by the Nazi regime to dictate the church’s relationship both to the regime and to its policies, but Dietrich Bonhoeffer, a German Lutheran pastor and theologian, was not fooled. He was able to discern the true Lutheran teachings and to refute the interpretations that the Nazis wanted to capitalise on. Bonhoeffer’s observation that believers were being ministered “cheap grace” is exactly and deliberately parallel to his view that the national Church was failing to take “costly” responsibility in the face of Nazism.

Ultimately, Bonhoeffer’s desire was to free his country from the tyranny of Nazism. He could see that the Church had been deceived and rendered politically voiceless by the Nazi regime, in that, as Gonzalez puts it, “Protestantism was sorely lacking in a theology that could help it understand the events of the times, and respond to them.”[3] Indeed, “Protestant liberals had no theological tools with which to respond critically to the new challenge.”[4]

At the same time, Christians were being deceived into spiritual inactivity by the Church’s liberal interpretation of Lutheran doctrine, which Bonhoeffer describes in terms of “grace as a doctrine, a principle, a system. It means forgiveness of sins proclaimed as a general truth, the love of God taught as the Christian ‘conception’ of God. An intellectual assent to that idea is held to be of itself sufficient to secure remission of sins.”[5] Bonhoeffer characterises this as “cheap grace” in his confronting work, “The Cost of Discipleship” in 1937.

Bonhoeffer set out to reform the Church’s thinking both in terms of her political engagement and in terms of her teachings about discipleship because ultimately the two concepts are applications of the same truth, just in different contexts.

The role of the Lutheran Church during the rise of Nazism was influenced by Luther’s “Two Kingdoms” reflections on the nature of the Church-State relationship. (“Strictly speaking, neither the term ‘two kingdoms’ nor ‘two reigns’ is used in the Lutheran Confessions, yet both terms have become deeply embedded in Lutheran theology.”)[6] This theology is expressed by the (modern) Lutheran Church in these terms:

Gonzalez explains, “The state must operate under the law, and its main purpose is to set limits to human sin and its consequences … In concrete terms this meant that true faith should not seek to impose itself by means of civil authority”.[8] Because of the influence of the rationalism that arose from the Enlightenment during the last of the three centuries spanning between Luther’s day and Bonhoeffer’s[9], this theology had progressed (or, perhaps, “regressed”) to a point where the Church took almost no role in the national political dialog, focusing instead exclusively on spiritual matters. Bonhoeffer advocated a vital role for the church in defending Biblical truth and arguing for Christian values at the national level.

Luther’s understanding of Church-State relations was not one of the Church being subservient and acquiescent to the State. In fact, Luther’s thinking came from the New Testament theme expressed in Romans 13, in which the Roman Empire was considered by Christians to draw its authority to rule from God rather, than from the Emperor[10]. This same theme applies in Bonhoeffer’s view of contemporary German national politics: The government draws its authority from God, and therefore not from a totalitarian leader such as Hitler. This idea is explicitly developed in “The Barmen Declaration” of 1934.[11]

On individual discipleship, Bonhoeffer taught his seminary students that the Lutheran Church of the day was focussed far too heavily on her sacramental, preaching, and worship ministries, and was dramatically under-emphasising the “call” on the life of the believer.[12] Plant observes that “Bonhoeffer glumly concludes, Lutherans poured out rivers of grace without end but only rarely accompanied this with the call rigorously to follow Christ.”[13]

Bonhoeffer called the Church and the individual Christian, to recognise that our calling is one which has responsibilities associated with it. Famously, Bonhoeffer states, “When Christ calls a man, he bids him come and die.”[14] The central message of Bonhoeffer was plain. Christians, when confronted with a situation of injustice and evil, must do something.

Bonhoeffer stood for action on several fronts. This action would amount to “costly” behaviour because the Nazi regime would not tolerate dissent. Specifically, he advocated Church responses against the anti-Semitic pronouncements of the Nazi regime. It also required individuals to comprehend and incorporate the principles of “costly” discipleship into their lives, resisting the evil instructions of their government and acting to undo some of the brutality that was being practiced on Jews and others, despite the personal cost.

Luther had been understood as being anti-Semitic for generations. He wrote acerbically about Jews, particularly in a chilling tirade which begins, “I shall give you my sincere advice”, and continues on to describe the violent removal of everything Jewish from Germany.[15] The Nazi regime fulfilled this advice on 9th-10th November, 1938 in an event dubbed “Kristallnacht”. World opinion turned against the Nazi regime in response, but Bonhoeffer had been speaking out against Nazi anti-Semitism since as early as 1931[16]. Later, Karl Barth (a Swiss theologian who was influential in Bonhoeffer’s life) “recalled with shame that Bonhoeffer had spoken out more clearly and much earlier than any of them about the treatment of the Jews”.[17]

Bonhoeffer argued that Christian concern for the oppressed overrides any concerns specifically about Jews, as expressed by Luther or anyone else. In the face of injustice, he argued that the Church must hold the State accountable, care for victims, and even act to intervene:

… when faced with an unjust state.

First, the church must put the question to the state whether it can answer for its action as a legitimate political action.

Second, it must care for the victims of injustice.

Third, If the Church found that the state was unscrupulously meting out too much or too little law and order, it could not be content with (to use the simile of a mad driver) ‘binding up the victim of the wheel, but must put a spoke in the wheel’[18]

The voice of Martin Luther, as it echoed down the centuries leading up to the 1930’s, had placed the Lutheran Church in a position from which it had no response to the clever deceptions of Nazism. Dietrich Bonhoeffer possessed the remarkable discernment required to chart the restoration of the Church to a proper understanding of her own role with respect to the State, and simultaneously also in the discipleship of her flock. “Cheap grace” contrasted with “Costly grace” in “Discipleship” was the central plank of Bonhoeffer’s courageous and far reaching engagement with ongoing Christian thinking, German national history, Lutheran Church doctrine, and his own personal quest for the deeper revelation of Jesus Christ. It may not ever have been written, except that the context of the Lutheran Church with respect to the Nazi regime in Bonhoeffer’s day posed such a grave threat on each and all of those fronts.

“Commission on Social and Bioethical Questions: The Two ‘Kingdoms’.” Lutheran Church of Australia, 2001.

[9]“[Gotthold Lessing] laid the foundations of Protestant Liberalism that was to hold sway in Germany throughout the 19th cent.” – F. L. Cross, The Oxford Dictionary of the Christian Church, Reprinted (with corrections) ed. (Oxford University Press: London, 1958), 803.

[10] John 19:11, Romans 13:1 cf “It comes as a surprise, if not a shock, to realize that Jesus’ message was inescapably political and Paul’s concern in Romans 13 is very different from the popular understanding of unquestioning obedience to the state held by many conservative Christians.” – Editor, T. Wright, “The New Testament and the “State”,” Evangelical Review of Theology 22, no. 2 (1998).

[11] “The Barmen Declaration rejected ‘the false doctrine, that church ought to accept as the basis for its message, besides and apart from the one Word of God, other events and powers, figures or truths, as if they were God’s revelation.’” – González, The Story of Christianity, 365.

[16] “…anti-semitism in Germany was [considered] insignificant … Dietrich quickly realised that this was not so, and on his return to Germany in 1931 he spoke out clearly of the dangers.” – Robertson, The Persistent Voice of Dietrich Bonhoeffer, 141.