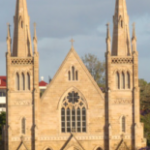 Has the Eucharist been redefined?

Does the Roman Catholic Church still hold to Transubstantiation as a doctrine? 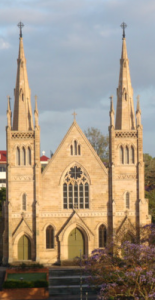 I attended Midnight Mass at the beautiful St Mary’s Church in Ipswich on Christmas Eve 2011. I thoroughly enjoyed it, and will do it again this year.

A couple of things caught my attention, and in my interest as a student of the Church, I asked the priest if I would be allowed to email some questions, to which he happily agreed.

I did send my questions, the very next day (Christmas Day…), but never got a response. I expect that this is an administrative problem at his end, but I never followed it up. As I am now visiting various churches and blogging about the similarities, differences, idiosyncrasies and emphases, I figure I’ll put my question here for the sake of reference because I have noticed precisely the same things in another Catholic Church, and now I’m really curious!

I suspect that it will be up to me to go and look up the various editions of the Missal and track the theological wranglings that have brought them about. I wonder if it’s even fair to expect a parish priest to keep up with such things? If it were me celebrating the Mass, I’d be most certain to understand the theology of what I was doing.

My question was as follows:

I very much enjoyed Midnight Mass this Christmas. In particular I was moved by your own evident joy in the Lord.

I am a student at the moment, studying a Bachelor of Ministry. I am passionately non-denominational and, although not currently involved with any Roman Catholic ministries, had thought that I had a reasonably good handle on the main distinctive features of Catholicism in terms of metaphysics, soteriology, and ecclesiology (none of which cause any discomfort in my ecumenical point of view).

I was, however, very interested to note several points in the Midnight Mass that surprised me as they didn’t match my expectations. As a student I am very interested to find out more about those particular matters because it seems that I had perhaps misunderstood some key distinctives of Catholicism. In each area my comments are far from “criticism” – almost “congratulations” indeed!

Firstly, I noticed that your message contained mildly Charismatic assertions (with which I fully concur). This is far from the sacramental emphasis (to which I would not object) that I was anticipating.

Secondly, The handling of the Eucharist dramatically attracted my attention in two particular areas: 1. That the bell did not get rung over the elements, and 2. That the form of words, effectively, “make these elements a spiritual thing, that they might become your flesh and your blood to us”, or similar (as far as I recall). This form of words appears to have the effect of making the transubstantiation a relative and subjective affair (“to us”); a view which I understood the Council of Trent unequivocally to have anathematised – hence my quite sincere surprise.

In my opinion the form of words appears to be an ecumenical “via media” of sorts, in that “to us” can also be understood to refer to the elements’ application “to us”, rather than referring to their meaning “to us”. Is that the intention? I also may simply have misunderstood.

Again, please accept my admiration for what I see as being probably intentional ecumenism and please don’t read any criticism into it. My questions are a sincere attempt to understand how the internal Roman Catholic theological dialog treats such questions. The subject “Church, Sacraments and Ministry” has been my favourite subject so far, closely followed by Church History. The question, particularly of the Eucharist, is central in both subjects and the historical controversy surrounding it is fascinating to me.

Again, thank you for a wonderful celebration.

Although I am yet to receive a reply, I have done some of my own research. It seems that Vatican II did reaffirm the Real Presence of Christ in the Eucharist as a Dogma, in SACROSANCTUM CONCILIUM. It says:

He is present in the sacrifice of the Mass, not only in the person of His minister, “the same now offering, through the ministry of priests, who formerly offered himself on the cross”, but especially under the Eucharistic species. (Section 7)

It’s interesting though, because although I have searched the Missal (to try yourself, click on the image to the right), I can’t find that explicitly affirmed in the liturgy. I found the reference to SACROSANCTUM CONCILIUM in the preamble (v3), in an extended defence under “A Witness to Unchanged Faith”, which seems to be responding to an accusation of change. Protesting too much?

In the Missal, the emphasis is on a Romans 12:1 “sacrifice” of a life lived by faith. That sacrifice is offered by the congregation along with the Eucharist. The Real Presence is not mentioned.

On one hand this diminishing of emphasis on the Real Presence seems like a laudable backing-away from Reformation polemics, but on the other it seems like, in Billy Joel’s words, “She is never wrong, she just changes her mind”. In this case, the Church allows words’ meanings subtly to shift their meanings over time, it seems, all the time denying that it’s happening. One can’t help feeling that in another 50, 100, or 300 years, the words will all have been buried under so much contemplation that their meaning will have adapted again to suit the church’s needs at the later time. At least it’s heading in a direction toward that of the other Christian thinkers, and not away…

Perhaps God is in even this?

I dunno. To a simple man like me it’s exhausting. It feels like bait-and-switch (As described in my article, “Ecumenism in Roman Catholic theology: Lumen Gentium analysed for Ecumenism“). Somewhere, someone once said, “Let your ‘yes’ be yes, and your ‘no’, no”.