Ishmael: In the Abrahamic Covenant, or not? 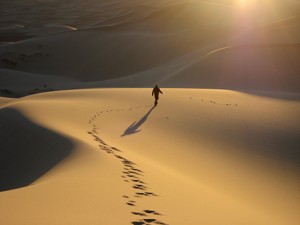 Abraham is the Patriarch who was chosen by God to be the ancestor of the People of God. Ishmael was Abraham’s eldest son. When Abraham was given the sign of his covenant with God, circumcision, he circumcised Ishmael into that covenant. But subsequent text in the Bible raises some questions as to just how “in” Ishmael really was.

We are dealing with a time about 2000 years Before Christ. In Genesis 12, God selected Abraham (at that time called “Abram”), as the progenitor of a “nation” of people, for the purpose of blessing all other nations (“families”):

Now the Lord said to Abram, ‘Go from your country and your kindred and your father’s house to the land that I will show you. I will make of you a great nation, and I will bless you, and make your name great, so that you will be a blessing. I will bless those who bless you, and the one who curses you I will curse; and in you all the families of the earth shall be blessed.’

As a later clarification of what God meant by “the land I will show you”, when Abram reached Canaan, God spoke again:

Then the Lord appeared to Abram, and said, ‘To your offspring I will give this land.’

The problem was, Sarai, Abram’s wife, “was barren; she had no child” (Genesis 11:30). How would God’s promise be fulfilled?

Abram said, ‘O Lord God, what will you give me, for I continue childless, and the heir of my house is Eliezer of Damascus?’ And Abram said, ‘You have given me no offspring, and so a slave born in my house is to be my heir.’

But God took him out and insisted that he would fulfil his promise. He didn’t describe how, but Abraham believed him. In one of the most famous and dramatic moments in the whole Biblical narrative, this event resulted in Abram being reckoned as “righteous”, which means properly in relationship with God.

But the word of the Lord came to him, ‘This man shall not be your heir; no one but your very own issue shall be your heir.’  He brought him outside and said, ‘Look towards heaven and count the stars, if you are able to count them.’ Then he said to him, ‘So shall your descendants be.’

And he believed the Lord; and the Lord reckoned it to him as righteousness.

Sarai, Abram’s wife, took it on herself to encourage Abram to take her handmaiden as a surrogate so that he could produce his heir.

Now Sarai, Abram’s wife, bore him no children. She had an Egyptian slave-girl whose name was Hagar, and Sarai said to Abram, ‘You see that the Lord has prevented me from bearing children; go in to my slave-girl; it may be that I shall obtain children by her.’ And Abram listened to the voice of Sarai.
– Genesis 16:1-2

Hagar bore Abram a son, and this was Ishmael.

Thirteen years later, it all gets very interesting…

Abram has another encounter with God. God changes his name to “Abraham”, as an indication of the prophecy of being a father of many nations. Sarai’s name is similarly changed to Sarah.

No longer shall your name be Abram, but your name shall be Abraham; for I have made you the ancestor of a multitude of nations.

This is all wrapped up in the context of the covenant being signified by circumcision.

This is my covenant, which you shall keep, between me and you and your offspring after you: Every male among you shall be circumcised.

God makes it clear that it will be another son, Isaac, who will be important. He will be borne by Sarah this time, and he will be the focus of God’s plan instead of Ishmael.

Then Abraham fell on his face and laughed, and said to himself, ‘Can a child be born to a man who is a hundred years old? Can Sarah, who is ninety years old, bear a child?’ And Abraham said to God, ‘O that Ishmael might live in your sight!’ God said, ‘No, but your wife Sarah shall bear you a son, and you shall name him Isaac. I will establish my covenant with him as an everlasting covenant for his offspring after him.’

The Blessing of Ishmael

So what happens to Ishmael? What does it mean that God says, “No”, to Abraham’s request for Ishmael to “live in your sight”? Particularly when God goes on to bless Ishmael:

‘As for Ishmael, I have heard you; I will bless him and make him fruitful and exceedingly numerous; he shall be the father of twelve princes, and I will make him a great nation. But my covenant I will establish with Isaac, whom Sarah shall bear to you at this season next year.’

The Circumcision of Ishmael

That very day Abraham and his son Ishmael were circumcised; and all the men of his house, slaves born in the house and those bought with money from a foreigner, were circumcised with him.

I would make the note here that we know precisely how old Ishmael is when he is circumcised. He is thirteen years old. Precisely the age when Jewish boys have their Bar Mitzvah (Which means “Son of the Covenant“. It is the age of accountability). Here is how we know Ishmael’s age:

When Abram was ninety-nine years old, the Lord appeared to Abram, and said to him, “I am God Almighty; walk before me, and be blameless. And I will make my covenant between me and you, and will make you exceedingly numerous … This is my covenant, which you shall keep, between me and you and your offspring after you: Every male among you shall be circumcised. You shall circumcise the flesh of your foreskins, and it shall be a sign of the covenant between me and you … Then Abraham took his son Ishmael and all the slaves born in his house or bought with his money, every male among the men of Abraham’s house, and he circumcised the flesh of their foreskins that very day, as God had said to him.”

About 14 years later, Isaac was born. Abraham circumcised the baby boy, just as he had been told.

Sarah conceived and bore Abraham a son in his old age, at the time of which God had spoken to him. Abraham gave the name Isaac to his son whom Sarah bore him. And Abraham circumcised his son Isaac when he was eight days old, as God had commanded him.

Sarah excludes Ishmael from the inheritance

Now there were two sons, Ishmael the teenager, and Isaac the baby. Ishmael was apparently a great kid. He was playing with young Isaac, but Sarah didn’t like it. Possibly she thought the boys would one day be rivals. Whatever the reason, she was uncomfortable with it.

So here we have Sarah declaring that Ishmael will not “inherit”. Inherit what? And what control does Sarah have over this? Isn’t it a matter for Abraham… and for God?

God reassures Abraham that Ishmael will be blessed, but that Isaac is the way in which Abraham’s offspring will be understood, (“named”, a notion connected with the firstborn son taking up the father’s legacy in the family):

God said to Abraham, ‘Do not be distressed because of the boy and because of your slave woman; whatever Sarah says to you, do as she tells you, for it is through Isaac that offspring shall be named after you. As for the son of the slave woman, I will make a nation of him also, because he is your offspring.’

As we see Ishmael will also be “a nation”, specifically because he is Abraham’s offspring.

God heard the voice of the boy; and the angel of God called to Hagar from heaven, and said to her, ‘What troubles you, Hagar? Do not be afraid; for God has heard the voice of the boy where he is. Come, lift up the boy and hold him fast with your hand, for I will make a great nation of him.’ Then God opened her eyes, and she saw a well of water. She went, and filled the skin with water, and gave the boy a drink.

Despite having been banished in this way, Ishmael still comes back to bury his father, some seventy+ years later.

At that point, the promises to Ishmael were on the way to being realised, with twelve “princes”, or tribal leaders, having been born to him:

These are the descendants of Ishmael, Abraham’s son, whom Hagar the Egyptian, Sarah’s slave-girl, bore to Abraham. These are the names of the sons of Ishmael, named in the order of their birth: Nebaioth, the firstborn of Ishmael; and Kedar, Adbeel, Mibsam, Mishma, Dumah, Massa, Hadad, Tema, Jetur, Naphish, and Kedemah. These are the sons of Ishmael and these are their names, by their villages and by their encampments, twelve princes according to their tribes.  (This is the length of the life of Ishmael, one hundred and thirty-seven years; he breathed his last and died, and was gathered to his people.) They settled from Havilah to Shur, which is opposite Egypt in the direction of Assyria; he settled down alongside all his people.

Joseph was sold to the Ishmaelites

In later generations, Joseph (of  “technicolour dream coat” fame), was sold by his brothers to a group of traders who were heading to Egypt.

Then they sat down to eat; and looking up they saw a caravan of Ishmaelites coming from Gilead, with their camels carrying gum, balm, and resin, on their way to carry it down to Egypt. Then Judah said to his brothers, ‘What profit is there if we kill our brother and conceal his blood? Come, let us sell him to the Ishmaelites, and not lay our hands on him, for he is our brother, our own flesh.’ And his brothers agreed.

Who were they? “Ishmaelites”! But were they, really?

When some Midianite traders passed by, they drew Joseph up, lifting him out of the pit, and sold him to the Ishmaelites for twenty pieces of silver. And they took Joseph to Egypt.

This is a side issue, of course, but Midian was Ishmael’s half-brother, born to Abraham and Keturah. So, can someone be both “Ishmaelite” and “Midianite”? Of course they can, in the same way someone can be both “French”, and “Canadian”, or both “African” and “American”, etc. These labels can be used to refer just as easily to someone’s ancestor, or their homeland. It is quite possible that these were descendants of Ishmael, who hail from Midian territory, or vice versa.

Ishmaelites and Midianites as enemies of the Israelites

Later, at various points in history, Ishmaelites and Midianites are mentioned as enemies of Israelites. For example in Judges 8, it was “Midian” (Judges 8:22) from whom Gideon had delivered the people, but the enemy were “Ishmaelites” (Judges 8:24).

But then, we need to consider that there were times of open warfare between the Northern Ten Tribes of Israel, and the Southern two tribes of Judah and Benjamin! Just because they’re at war doesn’t make them alienated. In fact, in a way, the Ancient Near East is one big family feud.

What can we make of it all, with respect to Ishmael?

Certainly it seems that Sarah’s desire to banish Ishmael was not precisely in accord with what God had in mind. Although it does seem that Ishmael was not to inherit his father’s (promised) land, nor his naming rights (as firstborn son), he was, nevertheless, loved by his father, circumcised into the family, and remained a true “son of Abraham”.