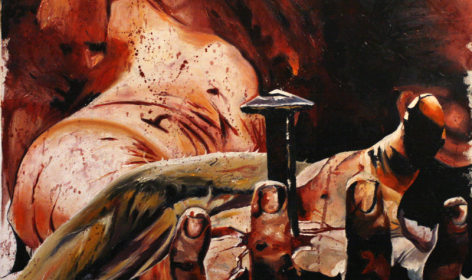 Jesus! Why so Violent???

Did it really have to be so violent? 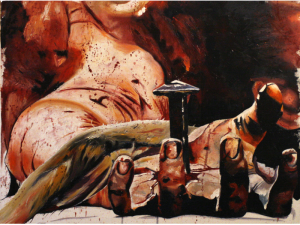 A good friend of mine asked me this question, and on reflection, it’s a question that others most probably ask, too: “Would he still have been a saviour if he had died peacefully in bed? Why did Jesus’ death need to be so violent?”

Actually, yes. It did need to be violent

The short answer is “Yes”. Yes, it had to be violent.

I’m not going to wax theological here, talking about “atonement”, or “propitiation”, and contemplate “the blood of Jesus” in a mystical way. I’m also not going to rely on Old Testament precedents of animal sacrifices to explain it. All of those things are valid, but they aren’t required to explain why Jesus’ death had to be horrific and violent. In fact, understanding what I show you here will put all those other things into a helpful context.

In short, violence is the problem, and Jesus had to suffer the violence to reveal the solution.

Did Jesus think it was necessary?

Jesus saw his own suffering as absolutely integral to his ministry. It was a key theme in his teaching:

Then he began to teach them that the Son of Man must undergo great suffering, and be rejected by the elders, the chief priests, and the scribes, and be killed, and after three days rise again.

Just as we might object to this now, saying, “does it really have to be that way?”, Peter objected to it and Jesus gave him a withering rebuke:

He said all this quite openly. And Peter took him aside and began to rebuke him. But turning and looking at his disciples, he rebuked Peter and said, “Get behind me, Satan! For you are setting your mind not on divine things but on human things.”

In other words, “divine things” militate against Jesus dying quietly in bed.

What was Jesus even doing?

It is important at this point to reflect on what Jesus actually thought he was doing in the first place, which caused him to be so certain that “divine things” meant, for him, such an awful death.

Again, without getting all jargonistic about it, let me lay out how Jesus’ ministry works:

Firstly, note that the first century Jews knew themselves to be out of favour with God. This was related to the great calamity of the fall of Jerusalem hundreds of years earlier, which was, their prophets had told them, because of their sinfulness. That sinfulness amounted to a list of charges levelled against the national leadership under a few broad categories: Pursuit of other gods, unjust extortion of God’s people, hypocrisy, and impiety. Notice also, then, that Jesus was completely pious, railed against hypocrisy, spoke extensively about justice for those being oppressed, and was so fiercely and intimately devoted to God that he used the appellation “father”!

So Jesus was, by personal example, highlighting the errors of God’s people. In precisely that context he was telling people to “repent”.

How does that result in a violent death?

If God’s creation generally, and human beings specifically, are fondly regarded by God then the extent to which people are good to one another and to the rest of creation translates directly into an indication of their attitude towards God. When people do evil to one another, it is also equivalent to doing evil to God. This principle is carefully spelled out in the Parable of the Sheep and the Goats.

If that weren’t enough, what if people are treating other people badly, but then find themselves dealing directly with God’s Anointed One, his exemplary son, and they deliberately turn on him? That is the height of rebellion. That’s what the Parable of the Tenants is all about.

In these parables we are touching something very close to the answer to the question, “Why so violent?”…

The role of the Innocent Victim

The presence of the innocent, the downtrodden, and the vulnerable, in the world is an opportunity for others to act justly toward them, or else to act unjustly. The innocent, in this sense, belong to God. A person’s reaction to innocent or vulnerable people reveals who they really are with respect to God.

Jesus made himself available as the meek one, the pious one, the one of whom Isaiah’s spoke:

a bruised reed he will not break,
and a dimly burning wick he will not quench;
he will faithfully bring forth justice.

The “whole world” (with the notable exception of those who trusted in him), demonstrated that they were worthy of God’s judgement by stripping God’s very son, mocking him, beating him, and putting him to death.

This was the moment in history at which humanity openly declared a complete contempt for God. There was no “less violent” way to do this. The violence is part of the issue. Humanity is hopelessly addicted to violence, and will employ it against God’s purposes, and that is one of the central problems humanity has. If Jesus’ ministry had involved less violence, his work would not have addressed the problem.

The Crucifixion was the declaration by humanity that humanity rejects God, and everything godly. It was a cosmic declaration of war, and a pronouncement that God had been silenced and defeated.

The Resurrection was the declaration by God that God has not rejected humanity, and values humanity. It was a cosmic declaration of forgiveness and reconciliation, and a pronouncement that God had not been silenced.

The Resurrection says that even though you and I are human, made of flesh and blood, and even though this humanness has the seeds in it of violence, apostasy, rejection of God, intolerance, and every rebellion imaginable, as demonstrated in the Crucifixion of God’s Son, nevertheless this humanness has been created in God’s image, and God retains the confidence that by His Spirit this humanity can be reconciled to Him. This confidence still stands, despite humanity doing it’s worst, because it does not depend on humanity but on the will and power of God.

For while we were still weak, at the right time Christ died for the ungodly. Indeed, rarely will anyone die for a righteous person—though perhaps for a good person someone might actually dare to die. But God proves his love for us in that while we still were sinners Christ died for us. Much more surely then, now that we have been justified by his blood, will we be saved through him from the wrath of God. For if while we were enemies, we were reconciled to God through the death of his Son, much more surely, having been reconciled, will we be saved by his life. But more than that, we even boast in God through our Lord Jesus Christ, through whom we have now received reconciliation.