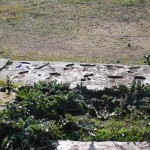 Reflections on the Trip of a Lifetime: Day 3 Corinth and Athens 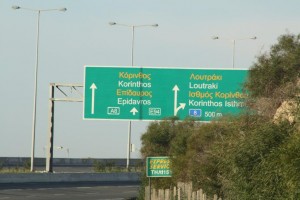 We drove down the coast to Corinth in the morning, and returned to Athens after lunch to see the Parthenon and the Areopagus.

I was looking forward to seeing the canal, and it did not disappoint! I only regret that photographs do not do it justice.

I was surprised to find that the canal is not really particularly close to the ancient city of Corinth. I had pictured it being very close, given that it is the narrowest part of the isthmus, and that Corinth’s economy was involved with the shipping trade. I had imagined that the canal would have been on the very spot where ancient vessels were dragged overland.

It may be that the canal’s location is more steep than a bit further down, where ancient Corinth stands. It may also be that the incredible mountain with the temple of Aphrodite on it could have been a draw card for the site of the ancient city.

The second “bridge” is at water level. Watch how it works…

The Temple of Aphrodite 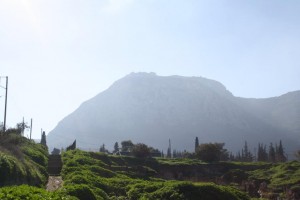 I was also surprised at the geography of the temple, with respect to the city.

I had pictured Corinth as surrounding a hill, atop of which there was a temple. As it is, if the temple prostitutes came down into the town each night, they must have been fit girls because it’s a long walk, and even harder to climb back up! I’m not sure that the legends have not been embellished a little. Perhaps on special days there was a procession of prostitutes from the temple. It seems highly impractical to have them tramping (so to speak) up and down each day.

Try zooming out on the map until you see the Temple of Aphrodite, to get some idea of how far away it is.

The City of Ancient Corinth

This was our first experience of exploring an ancient site with direct relation to scripture. It took time to get the hang of it, but I found myself learning about pillars and capitols, stoa, the agora, and so forth, without too much difficulty.

Engagement with the Text

It was fascinating to connect with the importance of tent-making in the ancient world (Acts 18:3), since so many people moved around, and tents were the logical solution. 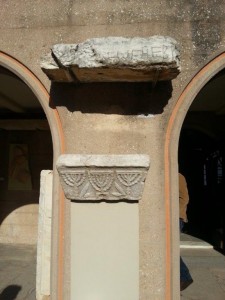 It was also very interesting to note that there is physical evidence, but restricted to two items, of a synagogue in Corinth. It is reasonable to conclude that this was from the synagogue of Acts 18:4.

We learned about how substantial the city was, with over 100,000 people involved. This makes it a relatively major centre. This, combined with the colourful mix of classes of people, as well as travellers, makes Corinth an understandable base for evangelism.

Reading the Acts 18 narrative with a view to the context of a Roman leader dealing with a disturbance, it becomes understandable that Paul’s indignant encounter in the Synagogue (Acts 18:6) would not have been at all important to Gallio, who had no reason to take any interest in some esoteric controversy among the Jews about their own beliefs (Acts 18:15). The Jews were already more or less suspect because they weren’t involved in the official religion of the Empire anyway, and Gallio was interested only in proper order, not religious doctrines. 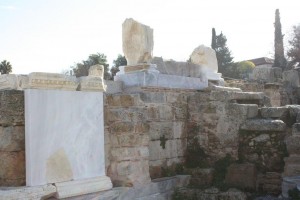 It was touching to think that we were most likely standing on the very spot where poor Sosthenes was lynched, without Gallio intervening (Acts 18:17). The implied reader is probably supposed to see Gallio as a bit of a villan here, but given his mandate for simple law and order, it is quite understandable that he allowed a bit of bush justice to be administered. At the very least it probably saved him the trouble of making a report about the whole matter, and placated the townspeople.

An alternative emphasis in Luke’s narrative is plausible, too: If Luke/Acts is part of the preparation for Paul’s defence in Rome, Luke may subtly be implying that Paul should simply be ignored and dismissed in his trial, as Gallio had effectively done, rather than tried for these mystifying, exclusively religious, Jewish doctrinal misdemeanors he was originally accused of in Jerusalem. At each point in the journey, Luke points out the difficulty that the Romans have finding fault with Paul under Roman law, because the controversy relates to Jewish peculiarities (Acts 23:6, Acts 23:29, Acts 24:19-21, Acts 23:29), and his long imprisonment under Felix is characterised as somewhat arbitrary and unjustified (Acts 24:25-27). Before Agrippa, the story finally assumes the character of Jesus’ trial before Pilate, with Luke carefully recording, “Agrippa said to Festus, ‘This man could have been set free if he had not appealed to the emperor.’” (Acts 26:32). This resonates with the theme of Jesus’ trial in which Pilate found no fault in him (Luke 23:4), and wanted to set him free (John 19:12). 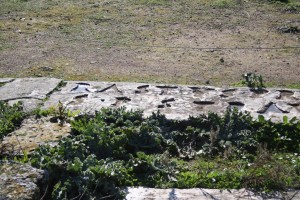 I found it significant, and relatively believable, that the inscription at the Odeon was a plausible link to the Erastus of Romans 16:23 and 2 Tim 4:20 (and Acts 19:22? Probably so. See this article) That gave me a little thrill, actually.

In the first of what was to become a series of increasingly touching moments for the whole group, we sang worship songs together in the Odeon. 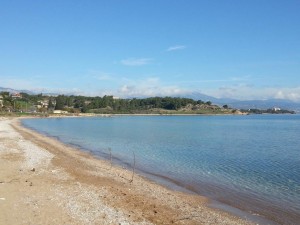 We stopped briefly at Cenchreae. This was where Phoebe was deacon of a church group (Romans 16:1), and also where Paul had his head shaved in connection with a vow, probably a Nazarite vow (Ref: Num 6:1-21), which presumably had been completed.

Such a small village provided a strangely poignant sense of “connection” with the past. It was relatively easy to imagine a small 1st Century settlement here.

Visiting the Parthenon was a real highlight. The sheer imposing bulk of the structure, and the opulence and military power that it implies, made it an intimidating structure throughout it’s years of use. Indeed, this was part of its purpose.

It is also very impressive now, even in its now dilapidated state. This is still true when viewed from the area immediately below, at ground level! That would have been Paul’s perspective as he spoke in the synagogue and the agora (Acts 17:17). Yet he took his message up to the Areopagus, which is right in front of the whole acropolis complex, and provided a commentary on these massive, imposing, politico-religious symbols, contextualising them all (Acts 17:24-25) squarely within the ambit of the invisible “unknown god”, whom Paul proclaimed (Acts 17:23).

Engagement with the Text

The previous day we had read Acts 17, and it now came into sharp focus as we all sat on the Areopagus to discuss it. Many in the group found it profound to hear the text read out in that place. I enjoyed that too, but for me it was more that I was contemplating the nature of Paul’s message, and it’s implications for his ministry.

All too often, because Paul mentions “repentance” (Acts 17:30), an anachronistic emphasis is placed on his message, characterising it as a call to moral purity. It isn’t. Paul is proclaiming that the time to be ignorant of the nature of the “unknown god” has finished, and people now need to repent of that ignorance.

While God has overlooked the times of human ignorance, now he commands all people everywhere to repent, because he has fixed a day on which he will have the world judged in righteousness by a man whom he has appointed, and of this he has given assurance to all by raising him from the dead.’

It strikes me that preaching morality to the philosophers would have been a breeze, and unremarkable. They were accustomed to debating morality. But to command them to repent of ignorance is bold indeed! Their whole self perception was founded on the idea that they were the “wise of the world”, (cf. 1 Cor 1:20-25). “Dem’s fightn woyds”, is an expression that sprang to mind.

This is a detailed analysis of how that contemplation works:

Reflections on the Trip of a Lifetime: Day 0 Anticipation

Expectations These are my thoughts as I pack for a Study Tour of Greece and Turkey with my Bible College: Intellectually My thinking process…

Reflections on the Trip of a Lifetime: Day 3 Corinth and Athens

Corinth and Athens We drove down the coast to Corinth in the morning, and returned to Athens after lunch to see the Parthenon and… 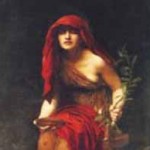 Reflections on the Trip of a Lifetime: Day 4 The Oracle of Delphi

The Oracle of Delphi We headed out from Athens, and in a two hour trip we saw an amazing landscape change from cityscape, to countryside, to…

Reflections on the Trip of a Lifetime: Day 5 Athens – Istanbul – Cappadocia

Athens - Istanbul - Cappadocia Just as we started to get used to Athens, we were off into the great unknown territory of Turkey. Unknown, that is,…

Reflections on the Trip of a Lifetime: Day 6 Kaymakli, Sultanhani Caravanserai, Konya

Kaymakli, Sultanhani Caravanserai, Konya For many in the group, the day began with a hot air balloon ride! They tell me it was amazing, and…

Reflections on the Trip of a Lifetime: Day 7 Mevlana Museum, Pisidian Antioch

Reflections on the Trip of a Lifetime: Day 8 Hierapolis, Pamukkale Pools, Colossae, Laodicea

Hierapolis, Pamukkale Pools, Colossae, Laodicea Oh my goodness, what a day!   Hierapolis Hierapolis is mentioned in the Bible only… 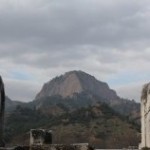 Reflections on the Trip of a Lifetime: Day 9 Philadelphia, Sardis, Kusadasi

Philadelphia, Sardis, Kusadasi Happy birthday to me! January 18th is my birthday, and someone on tour happened to ask, just a couple of… 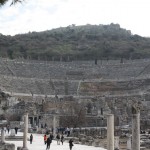 Reflections on the Trip of a Lifetime: Day 10 Ephesus

Ephesus Just when you think you've got no more "wow", there's Ephesus... The whole site is like a visual feast. It reminded me of those…

Reflections on the Trip of a Lifetime: Day 11 Patmos

Patmos We had an early start, so that we had time for the four hour boat ride to Patmos from Kusadasi... and four hours back again! We passed…

Reflections on the Trip of a Lifetime: Day 12 Smyrna, Thyateria, Pergamon

Smyrna (Izmir), Thyateria, Pergamon (Bergama) It's a big day when you visit three sites. On top of that, two out of these particular three were…

Reflections on the Trip of a Lifetime: Day 13 Assos, Alexander Troas, Troy

Assos, Alexander Troas, Troy Today we visited three sites, and all were impressive. It was another big day for all of us. He didn't let on, but I…

Reflections on the Trip of a Lifetime: Day 14 Gallipoli

Gallipoli Without any hesitation I can state that this was the most moving and emotional day of the tour. Gallipoli is special. Here it… 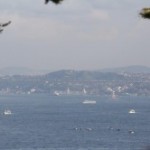 Reflections on the Trip of a Lifetime: Day 15 (and 16) Istanbul

Istanbul This is quite a town! It has twice the population of the largest city in Australia. The road rules seem to be taken as no more than a… 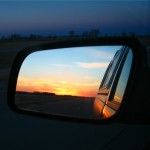 Reflections on the Trip of a Lifetime: In Review

The Greece and Turkey Trip in Review After we returned, I wrote a little summary of the Study Tour for my Bible College's magazine, Summa Supremo. I…