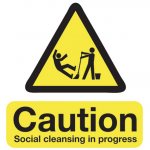 The other side of the “No Smoking” sign: discrimination by Social Cleansing

Is this Social Cleansing? 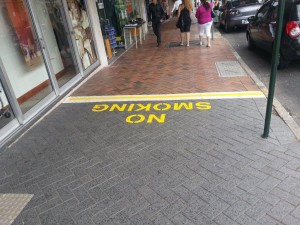 I’m a non-smoker. Indeed, I am even an ex-smoker, and I support the principle of removing cigarette smoke from the lives of those who don’t smoke.

But the recent (1st Feb 2013) ban on smoking in some of the public spaces in Ipswich has made me uneasy from the start. Today I figured out why.

I sit in the Mall every Tuesday, so I know the people there. I know the rhythm of life there. And what I saw today today was very painful for me.

Other articles about Tuesdays in the Mall

I saw a City Council Officer (escorted by a Police Officer) moving through the Mall booking smokers – $100 each. They were busy! Everyone knew the laws had changed. They knew the officers were booking people. They knew they were going to get caught, and they smoked anyway. It was a picture of an ad-hoc, ill-advised form of passive resistance. 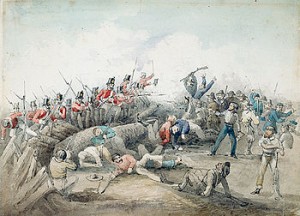 My friends struck up their smokes in defiance of the laws and copped the fine. Of course, for many of them the fine simply adds to their outstanding SPER debt, paid off at $10 per fortnight, and won’t make a jot of difference to them except to further marginalise them over time. Fines are no deterrent to a pensioner who already has a SPER debt of $5000 or more!

So I watched their disorganised and doomed protest. I saw them flailing against the insurmountable force of the law and getting beaten. It was The Eureka Stockade all over again. It was horrible. They don’t even really understand how, they just know that they are being treated unjustly, and so they react to it with defiance.

It’s not about smoke

They’re right, in fact. This ban is not about cigarette smoke. The areas covered by the ban are outdoor areas, and people are widely dispersed. There is no way to infer a health hazard for non-smokers in this setting. So what’s is all about? 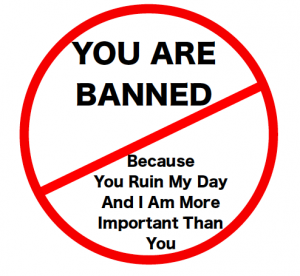 It’s about removing a certain kind of people from the public eye. That’s called “Social Cleansing”. In the article in the QT by Peter Foley above (or at least, in the headline…), he correctly identifies the target of this ban: not the smoke, but the smoker.

This ban will not make any significant impact on the use of tobacco products in Ipswich. Nor will it reduce any illnesses from passive smoking. All it will do is exclude people of a particular sub-culture from the public spaces.

Indeed, if this group spontaneously stopped smoking but still hung around the Mall, some other method would inevitably be sought.

Because removing them is the real goal.

“At least some of the losers have moved on”

I spoke to some of the store owners in the Mall. They all acknowledged that the Mall was quiet but nobody minded. One put it very clearly, “At least some of the losers have moved on”.

The shop owners are the ones who have lobbied for this ban. They have a voice in council and have made a compelling case: The people who smoke in the Mall, overwhelmingly, are the same ones bringing the tone of the whole Mall down. They’re the “losers”. The shop owners are tired of them, and welcome this smoking ban because it moves the “losers” somewhere else.

But where have they gone? These “losers”?

It remains to be seen. One thing’s for sure: they have gone somewhere. Wherever that is, they are still smoking, but the shop owners don’t care about that. They only want them gone. 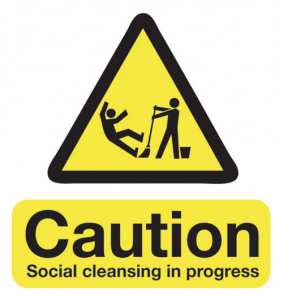 This is Social Cleansing: A particular group is undesirable so they get targeted.

In this case it is noticed that almost all of them smoke, so anti-smoking laws are used to move them on.

What’s the problem with this? They’re drug addicts anyway, for the most part. They’re disability pensioners, mentally ill, and alcoholics. It’s even quite likely that they are responsible for a fair bit of shoplifting. Why shouldn’t they be moved on?

Let’s face it: nobody cares. It’s hard to feel sorry for someone who buys and consumes tobacco products, right? And most of them are using all sorts of illegal drugs too. It would be difficult to imagine too much public outcry at moving a bunch of “losers” out of the Mall. And with no public outcry, why should the politicians care? They are in office to do the will of the community, and the community overwhelmingly wants these people to just go away.

You see, just because someone is bound up in the emotional and psychological chains of addiction, doesn’t negate God’s care for their welbeing. Indeed, it doesn’t negate God’s obligation on those of us with power, with money, and with a voice, to advocate for the ones who don’t have such privileges.

These people are no less “people” than the middle-class “nice” people. Simply moving them along is cruel, dismissive, and unethical. It sweeps the problem under someone else’s carpet. It deliberately abdicates the responsibility we each bear for one another in the community, making acceptance and support conditional on our socioeconomic status.

This is a pattern of thinking, and of community, and of religion, into which Jesus stepped. He set about criticising it, tearing it down, and pronouncing judgement on it. Such a system, in which an empowered, wealthy, socially elevated person has better access to justice, is a Satanic system. These people are being swept away simply because they lack the voice and power to object, and this is one of the primary objections that the 8th Century BC Prophets of Israel brought against that nation in the name of God, in the lead-up to the nation’s Exile for “disobedience”.

Jesus made it his business to stand alongside such people and speak for them, to denounce the unjust power structures, and to proclaim God’s concern for justice and equality.

Of course, this is just part of a bigger picture. The City of Ipswich has a bold plan to transform into a bustling, modern metropolis. The Amberley Military Super Base, combined with the ever-increasing pressure from the expanding mortgage-belt of Brisbane, mean that the population of the city is set to triple within the next generation!

I fully support that. I think Ipswich can and will be a fantastic commercial and social center, and a model of the modern city. But the City has a responsibility to bring her citizens along for the ride!

Ipswich has previously been a focal point for services to the homeless, the drug dependent, the mentally ill, and so forth. This has made Ipswich one of the very highest priority areas for Federal funding of services, and the focus of services has meant that the people needing those services have gravitated here.

What do we do with them?

If we do nothing, they will eventually be displaced to new centres: Rosewood, Laidley, Gatton, Toowomba, and other rural centres. They will be displaced by cost of living expenses and by Social Cleansing such as this latest smoking ban.

If we let that happen, we not only do a disservice to those towns, and to the Federal Government who has to track them down with census data to readjust the funding for services, but we fail the people too. And these people are citizens of the City. The City has a duty to represent them and to include them in the transformation that is going on, and has no right to ignore them and allow them to be displaced.

Until and unless the Ipswich Mall becomes an enclosed area, the ban should be lifted on the grounds that it is deliberately discriminatory, and therefore unethical. Failing that, designated smoking areas should be established in the Mall, away from the entrance of shops, complete with ashtrays.

Furthermore, if any citizen of the city has problems in their personal lives, and those problems are causing social issues, then it is these problems that need to be targeted – not their tobacco habit.

And targeting those problems requires love, and involves the building of communities, and that’s what I’ve been trying to do. Unfortunately, my job is now that much more difficult to do because the people are getting scattered from their customary places of gathering by this deliberate, “not in my back yard” ordinance.