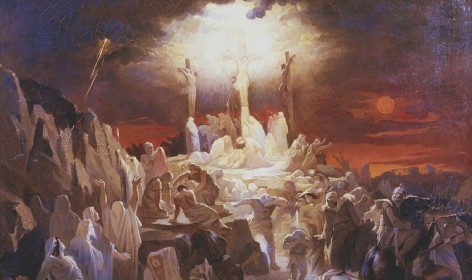 The Veil Torn, the Earthquake, and the Resurrection of the Dead – Matthew 27:51-54 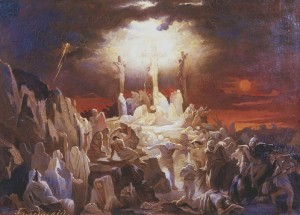 In Matthew 27, an orderly account of the process of Jesus’ arrest, interrogation, and crucifixion is proceeding along nicely, when all of a sudden there is a dramatic change. It is a change in style, and in content. No sooner does it begin, it is finished! But not before some rather startling claims have been made. Not the least of which is that “many” people rose from the dead and were seen in the Holy City.

What does it mean?

Could it literally be true?

The text says this:

At that moment the curtain of the temple was torn in two, from top to bottom. The earth shook, and the rocks were split. The tombs also were opened, and many bodies of the saints who had fallen asleep were raised. After his resurrection they came out of the tombs and entered the holy city and appeared to many. Now when the centurion and those with him, who were keeping watch over Jesus, saw the earthquake and what took place, they were terrified and said, “Truly this man was God’s Son!”

First, that within the Temple, the curtain which sectioned off the “Holy of Holies” was torn from top to bottom.

Second, that there was an earthquake.

Fourth, the centurion and some others declared Jesus to be God’s son.

To be honest I’m not convinced that Matthew was trying to say that these things literally happened. I think he was doing something else. I think what he was doing was great, and I think we’re generally missing the point.

But we might need to go through them one by one, just to show why there’s a problem with the literal interpretation:

Where a centurion would get a phrase like “God’s Son” is a mystery. Jesus was being crucified for claiming (so it was said), to be the legitimate king of the Jews. For a Roman citizen, a phrase like “God’s Son” would probably invite the question, “which god?”, because they had many. A centurion is quite unlikely to be sufficiently versed in Jewish messianic theology to be able to equate “king of the Jews” with “God’s Son” because of earthquakes.

Mark also reports this phrase being spoken by the centurion. Luke has a different, much less surprising one:

When the centurion saw what had taken place, he praised God and said, “Certainly this man was innocent.”

I’m not interested in picking holes in the many minor differences between the synoptics. In many cases they are useful for discerning what lies behind them, and I think this is one such case, as I will talk about below.

Ok, there was actually, as far as we can tell, an earthquake in this area some time within a couple of years one side or the other of Jesus’ crucifixion. Also, the rocks in the area where Jesus was crucified do show a split which is likely the result of an earthquake… at some stage in history.

Did all that happen at the moment when Jesus was crucified? Perhaps. Nobody can prove otherwise. But I plan to offer an alternative explanation below, which I think is far more satisfying both for my faith, and for the dignity of the Bible.

The Veil was Torn

There is no corroboration of the veil literally being torn in the actual Temple. Again, it can’t be proved that this did not happen, but let’s just look carefully here…

All the synoptics say essentially the same thing here: 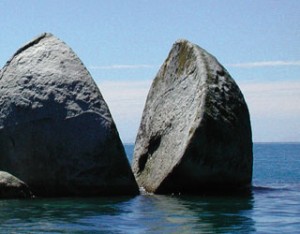 That doesn’t mean it didn’t happen. It’s just kind of odd. In a story that has been narrated a bit like a stage drama, suddenly we have this change in style.

Resurrected Saints were seen by many

This is a logical clincher – a firm clue that what we have here is not just more narrative. This is because of what historians can tell us.

Historians have established a broad consensus, both among those who are religious and those who are not, about the following facts:

These facts are well enough corroborated that they can be held to be true for historical purposes. Imagine how different that list would look if not one, but a great many people, known to the residents of Jerusalem, had been resurrected…

Also, had such a thing happened, it might be the second most important piece of news in the whole New Testament, very closely following behind the Resurrection of Christ! That it should be left out of all the other synoptics, and not mentioned in any other of the New Testament literature, particularly just a month or so later when Peter was preaching about the Resurrection, right there in Jerusalem, is beyond incredible.

What the haters say

There will always be those who seize on any opportunity to claim that the Bible has no credibility. Such people love this passage, because the story it tells is just a bridge too far. This, they conclude, is just someone much later in time embellishing the story. Such embellishment, they say, is where all of the stories of miracles came from, and the whole Jesus story is just a faith community projecting itself back in time through legend and story.

Without going into the logical flaws in that theory, let’s just acknowledge it and ask if there could be any other explanation.

How some have tried to say it refers to literal events

Plummer had a go. What he writes is fascinating, but I don’t ultimately find it convincing. See what you think: Something Awry In The Temple? Robert Plummer

Could there be another explanation? I suggest there is.

Let’s imagine a possibility. Let’s say that in the years following Jesus’ death, in the dynamic and excited, close-knit Christian community, certain hymns and songs were written. This takes absolutely no imagination, of course, because we know that this is precisely what happened. Passages like Philippians 2:6-11 are almost certainly early hymns, simply included in the text. There are many possible candidates.

Does this sound strange?

Imagine if I was telling a story about my life, and included, “Through many dangers, toils, and snares, I have already come; ‘Tis grace hath brought me safe thus far, And grace will lead me home”. My friends would recognise straight away that this is an unusual way for me to express myself, but only those who were familiar with Amazing Grace would realise that it was a quote. But I could quote it in a context like my own life story. At once I would be borrowing the language as more poetic than my own, and also appropriating the theme of the entire song into my story.

I’m supposing that there was a hymn, or some familiar liturgical formula, which talked about the great and glorious Resurrection of the Dead, the day when all the dead will be raised (the saints first, and then others). The hymn I imagine talks about those signs of the End of the Age – earthquakes and rocks splitting apart, and so forth. It talks about the Holy City (not so much the district of Jerusalem called “the Holy City” in Jesus’ time, but “The Heavenly Jerusalem” of Revelation 21…), and it talks about how the saints will inhabit that city. It talks about the veil of the Temple being torn “from top to bottom”, as a metaphor for ending the separation between God and humanity. It talks about every tongue, even those of Gentiles, confessing that Jesus truly is God’s son…

I’m going to suggest that a verse from that hymn was placed here in the text, not to try to make us believe that these things literally happened, but to get us singing our lungs out at this, the emotional crescendo of the Gospel story. I would suggest that Mark and Luke were invoking the hymn by the phrase, “the curtain of the Temple was torn in two”, but Matthew went on to quote more of the hymn.

For the record, I imagine that Luke’s account of the centurion is the most accurate, and that Mark and Matthew tied the centurion into the hymn as representative of all Gentiles…

I can’t prove it, but this, I suggest, is the most rational and sensible way to understand what these few verses are doing, sticking out from the story at such an odd angle as they are. They are not a rouse, and they are not dishonest. Properly understood, they are rather a literary device connecting us to some early hymn, which celebrated the Resurrection of Christ, and the promise that it represents to the world.

May it stand for ever, glorifying God.