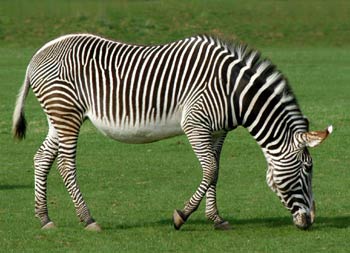 What is Transubstantiation? When a Zebra is not a Zebra; it’s an Ottoman, but it’s still a Zebra.

The Roman Catholic theology of Transubstantiation describes the Bread and Wine ceremony (Eucharist) as “the actual partaking of Christ in person, hence literally”. Many Protestants consider it to be a metaphor or a mnemonic instead. Who is right?

Firstly, let’s just acknowledge that people have died over this question. In the Reformation, at various times and in various places, what you professed on this matter could readily get you killed. Thank God that’s over.

How to present the Eucharist

I confess that I usually don’t emphasise the sacramental aspect of the Eucharist (bread and wine ritual) when I preside over it. Not because I’m scared of entering a controversy, but because other symbols are usually more important for the people participating. For example, the celebration is a powerful symbol of unity, and a precious commemoration of the crucifixion. 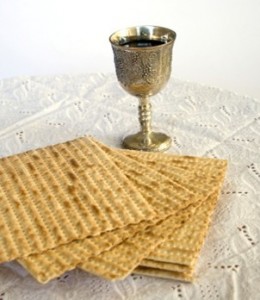 But can we dispense with the question of what the Romans say so readily?

I’m not sure that we can.

For a full defence of the Roman Catholic position, simply consult their resource: Catholic Encyclopedia: Real Presence. I’m not interested in going back over all that ground, though. I just have a couple of observations to make.

Firstly, when non-Catholics talk about this Roman Catholic teaching, it is rarely explained properly in the conversation. The notion is ridiculed on the grounds that what is being eaten has all of the measurable physical properties of bread, and the drink is observably wine. Therefore it seems patently silly to claim them as flesh and blood.

At various times people have apparently witnessed bread and wine turning into flesh and blood (ala Lanciano), and the Roman Catholic Church recognises this as fact. Unfortunately this would tend to suggest that, at all other times, the bread and wine must merely be what they appear to be… oh dear.

But the Romans are fully aware that the the elements have no resemblance to flesh and blood. In fact, the whole problem was a bit of a poser when the church sat down to lay out her theology in terms based on logic. They use metaphysics as the language to describe what’s going on, but I propose to illustrate the Roman Catholic teaching on the matter, for the benefit of those who are uninitiated in metaphysics. 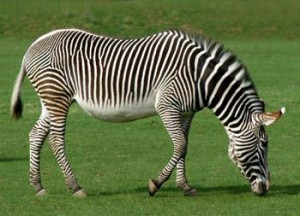 Let’s suppose we have a zebra. The zebra is living and conscious. In this case we have a rather plump one. Her name is Zelda.

We like Zelda, and we wish her no harm, but frankly, what we need is an ottoman lounge.

Can we eat our cake and have it also? The Romans say, “yes”.

Here’s how it works.

Firstly, you need to understand that existence does not simply consist in pink squishy bits, but in a certain essence. If we, as Sheldon Cooper suggests, were to replace our bodies with some form of machine, would be not still be human? What if we could upload our consciousness into some kind of computer? We would essentially still be human, but appear to be a computer.

Let’s go through something like that process with Zelda (don’t worry. No Zebras were harmed in the writing of this blog). What if we could keep Zelda’s life going, but alter her body…? For instance, what if Zelda essentially remained Zelda, still living, still conscious, but physically transformed into an ottoman lounge? 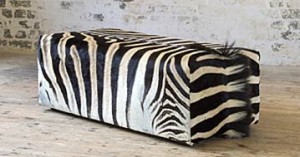 Now, this might not fully demonstrate the principle, and besides, I think it may be a crime under the Interior Design act.

Can we try that again?

This time with gusto! 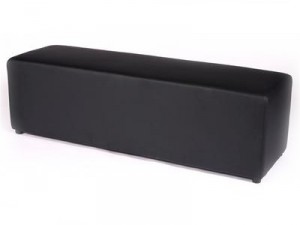 This is, you might suppose, an ottoman lounge. It certainly seems to be one.

If you hadn’t been aware of the little transubstantiation that went on beforehand, you might be tempted to think that this is not Zelda. But you’d be wrong!

Zelda is still alive, and still conscious. What’s it like being an ottoman? I don’t know. But Zelda does. She is a Zebra, but for all intents and purposes, and in all measurable ways, Zelda is now an ottoman.

Let’s just prove that, shall we?

See? There she is, completely unharmed.

You see, Zelda’s essence never changed. What changed (her observable physical properties), are called accidents. That doesn’t mean she’s a mistake! It’s just the word that metaphysicians use to confuse the rest of us. It means all of the time-and-space aspects of Zelda.

Jesus said to them, “Very truly I tell you, unless you eat the flesh of the Son of Man and drink his blood, you have no life in you. Whoever eats my flesh and drinks my blood has eternal life, and I will raise them up at the last day. For my flesh is real food and my blood is real drink.

Whoever eats my flesh and drinks my blood remains in me, and I in them. Just as the living Father sent me and I live because of the Father, so the one who feeds on me will live because of me. This is the bread that came down from heaven. Your ancestors ate manna and died, but whoever feeds on this bread will live forever.”

Frankly, I think it’s fair enough to scratch one’s head a little and to try to reconcile Jesus’ teaching on this matter. I don’t have a problem with the Romans turning to metaphysics to achieve that. After all, they’re just trusting what Jesus said, and trying to describe “how it can be so” (and “Atmospheric pressure” doesn’t convince the audience like it used to).

As an interesting aside, the term “hocus pocus” almost certainly arises from this very process. Traditionally, at the very moment that the Priest rang his little bell to mark the transubstantiation of bread and wine into the Real Presence of Christ, he uttered the Latin phrase, “Hoc est Corpus Meum”, which means, “this is my body”… since nobody (including the priest half the time), actually had any idea what the Latin Mass was actually banging on about, the association of the phrase with magic was unavoidable.

Strangely, the most acrimonious debates over this matter were not between the Roman Catholics and others, but between Protestants. Everybody was clamouring for the status of “most literal translation”:

Thus, while Luther was a literalist concerning his favorite text, “This is my body,” so was Zwingli about his, “Christ ascended into heaven,” and “The spirit gives life, the flesh is of no avail.” – Payne

Not of the same Spirit?

The deepest mystery to me is not the metaphysics, but why Luther uttered such a blasphemous comment with respect to Zwingli, “We are not of the same spirit”. Yes you are, Martin Luther. The Bible says so.

There is one body and one Spirit, just as you were called to one hope when you were called ; one Lord,one faith, one baptism; one God and Father of all, who is over all and through all and in all.