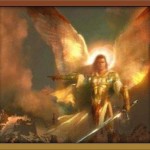 Who are these “angels”, and what do they want? 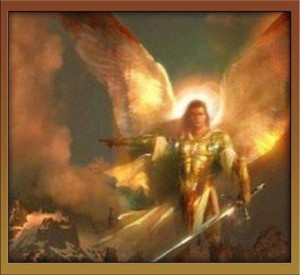 Who are all those angels, and what’s going on in the throne room of God?

I wrote this as part of another article entitled, “The Angels at Christmas time: What’s with that?“. I pulled it out as a separate item in the interest of keeping all my posts a little shorter.

This is a little overview of some of the things we know about angels, from the Biblical descriptions of them.

In the throne room of God there are four “creatures”/”beasts”, surrounding the throne (Revelation 4, Ezekiel 10). These are the “cherubim”. They are described also in Ezekiel 1, and Isaiah 6, both passages revealing the difficulty of describing them in words.

The cherubim also feature as the guardians of the Garden of Eden, in Genesis 3:24. 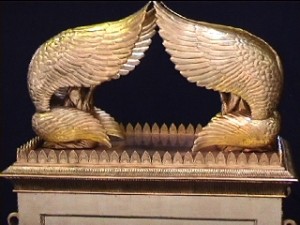 The Ark of the Covenant had a representation of two cherubim mounted on top of it, one at each end. Their wings stretching to touch one another. God was said to dwell “between the cherubim on the mercy seat” (Numbers 7:89, for example).

When Solomon built the temple, he added two more, identical but much larger cherubim, which essentially bracketed the whole room in which the Ark would sit (1 Kings 6:23-28). In this way there were four surrounding the earthly representation of the heavenly throne.

And within the oracle he made two cherubims of olive tree, each ten cubits high.

And he overlaid the cherubims with gold. 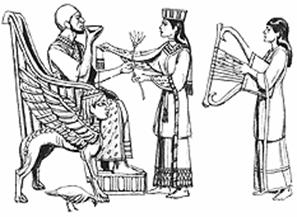 Canaanite kings of the period sat on thrones, surrounded by winged creatures, with footstools, and this *could* be more like what the Ark of the Covenant / Mercy Seat / Throne would have looked like. But we don’t really know.

The twenty four “Elders of Israel” are seated in thrones around the heavenly throne of God (Revelation 4:4). These are the representatives of the twenty four divisions of the Levitical priestly order (1 Chronicles 24:4-5).

The Throne of God is the “mercy seat”, from which God’s justice is pronounced and dispensed. It is the Ark of the Covenant. God is, therefore, said to “be” between the cherubim, for the purpose of ruling the people of God. Of course, God is omnipresent and the ancients knew that full well. His special presence with respect to the Ark was the fulfillment of the covenant promise to be with the people, and to rule them. 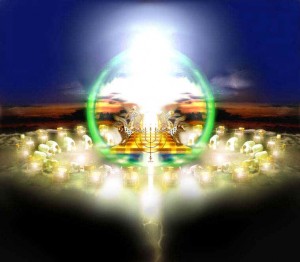 In Revelation 4, we have the throne of God, with God sat upon it (v2-3). Then we see the Elders (v4), and then the “seven spirits” (v5), which are “the angels of the seven churches” (1:20). These are “torches” (v5), which means “candlesticks” (1:12-13). In other words, it is the classic Jewish Menora candelabra, which holds seven candles and which features in the Tabernacle:

And thou shalt make a candlestick of pure gold: of beaten work shall the candlestick be made: his shaft, and his branches, his bowls, his knops, and his flowers, shall be of the same.

Revelation interprets that candlestick icon, and explains it as representing seven churches (Rev 1:4).

We see in Hebrews 1:14, that angels are “ministering spirits, sent forth to minister for them who shall be heirs of salvation”. Here we see part of that ministry, which is to stand before the throne of God on behalf of the churches. Jesus also mentioned this phenomenon, saying of children (and by association also of all believers), “I say unto you, that in heaven their angels do always behold the face of my Father which is in heaven.” (Matt 18:10).

All the other angels

Although not mentioned in Revelation 4, we get a sense of the narrative “camera” zooming out to include a larger picture in the next chapter, when Jesus Christ enters the scene. At that point we see the Throne, the cherubim and the Elders in the middle, but now surrounded by a veritable sea of angels! (Revelation 5:11).

This is not an exhaustive look at the whole topic of angels, but it’s enough so that you can know what I’m talking about when I make the point in “The Angels at Christmas time: What’s with that?“, that the angels are the audience for the Biblical story.

Link across to it and see why!