One Church, Across all Time

If there is “One Church”, and there always has been only one, then surely it’s the same Church…? 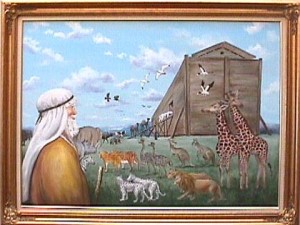 I stumbled across a wonderful expression of the “One Church” phenomenon in a theological textbook. I gladly receive it and add it to the wonderfully compelling image of “One Church”: we are part of the same church which was liberated from Egypt, and which was Exiled to Babylon, and so forth. We should feel at home in that church, as much as our neighbourhood church.

Because there is only one church.

Robert Jenson insists that “the initiating error of standard modern exegesis [i.e., historical‑critical exegesis] isthat it presumes a sectarian ecclesiology”—­one that fails to acknowledge that “the text we call the Bible was put together in the first place by the same community that now needs to interpret it.” The Christian affirmation of one church, existent across time and space, leads to the recognition that the biblical materials were not written to some community of faith other than our own. Hence, the “gap” we experience between the biblical world and our own is not so much historical as it is theological. The issue focuses on our comportment toward scripture, our willingness to be “taken in,” as Ellen Davis puts it, to enter a new imaginative world whose presuppositions we may not share initially and to allow scripture to read “against us” so that we are changed. With such a theological vision, we regard these biblical texts as our scripture and come to inhabit its story as our own. From this perspective, historical criticism’s presumption of a chasm separating the world of the Bible from our own lives cannot serve well as point of departure. – Joel B. Green

Therefore, the Patriarchs and Biblical heroes are not just figures from another time and another place, they are our fellow church members. They are journeying with us, and we with them. See “We are surrounded by such a great cloud of witnesses” – Hebrews 12:1 for a deeper look at this.

The Roman Catholic doctrine of the Communion of the Saints, in part, describes this phenomenon (of course, it includes the notion of Purgatory as well, which is logical from the Roman Catholic perspective, but mystifying from an Evangelical one). The Roman Catholic theological position includes, in my view, a sense of collapsing of all of the church’s liturgical history into a single event, in which the believers participate at every Mass, and which forms one single liturgical confession before God. The Event is identified as the Crucifixion (“Immolation of the Divine Victim”), and it seems that all liturgy is in some way conceived of as being spoken in that Event, by the faithful confessing community, before God, in Christ.

The language, particularly in the article on the Mass, is that of a “permanent sacrifice”, so that at all times the sacrifice is available for our participation in it. I have certainly heard plenty of Roman Catholic apologetic along those lines, but I think that my analogy of collapsing of all liturgical time into a single confessional moment is a better description of the underlying Roman Catholic theological intent, and is also a more satisfactory explanation of the problem of repeated participation in a once-for-all event. So then, it is not so much that the Crucifixion is “permanent”, which implies that it is perpetually incomplete, but “once, for all” (Heb 7:26), in that it is perpetually historically accessible through the sacramental liturgy of the Chruch, which is “in” that Event. That’s a bold thing to say – questioning the Roman Catholic description of her own dogma, but this is my blog, so I’ll say it anyway…

The challenge then, is to be as comfortable in the presence of Abel, Isaac, Joshua, David, Ezekiel, Paul, Tertulian, Luther, Barth, and LaSor, as we are in the presence of Christ Himself. They are all members of the One Church. You don’t have to agree and get along well with everyone in your church, but:

As it is, there are many parts, but one body.

The eye cannot say to the hand, “I don’t need you!” And the head cannot say to the feet, “I don’t need you!” On the contrary, those parts of the body that seem to be weaker are indispensable, and the parts that we think are less honorable we treat with special honor. And the parts that are unpresentable are treated with special modesty, while our presentable parts need no special treatment. But God has put the body together, giving greater honor to the parts that lacked it, so that there should be no division in the body, but that its parts should have equal concern for each other. If one part suffers, every part suffers with it; if one part is honored, every part rejoices with it. – 1 Cor 12:20-26

Importantly, at various times in the history of the church, seemingly critical matters including sexual expression and courting, marriage laws, religious festivals and liturgy, and even politics, have all undergone radical changes at various points, even within the Biblical narrative. So to continue this line of thinking, flick over now to “The Naked Gospel“, for a look at just how much of what we consider “essential” and “non-negotiable” has varied over time.