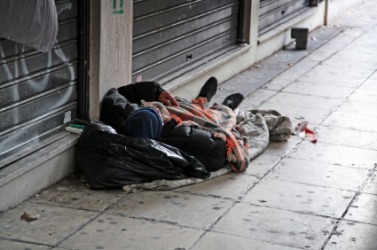 The Words of Life 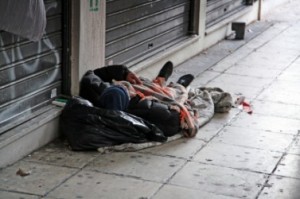 I met a mentally unstable, completely homeless, suicidal man. He had planned to commit suicide by drug overdose in just a few days’ time, on his birthday. He insisted that he had no reason to go on living. Many would probably look at his situation and agree.

It was banter. He was countering my remarks, which were all about encouraging him to live beyond the weekend. I can’t remember it word-for word. It went something like:

“I’ll be dead on Monday”

“You’re worth a better story than that. You’re a man.”

“I’ll be praying that I see you alive and well after Monday.”

“Well you’ll be praying for a dead man.”

“Well, I suppose you’re right about that. Even if you die, you’re alive to God.” (Yes, he said this! The fact that the language is remarkably apt for theological discourse is a coincidence. When he says, “alive to God”, he means, “alive in God’s opinion”, not “living oriented god-ward”, ala Romans 6:11)

This conversation had an impact on him. The next day he was visibly moved as he referred back to it. He said it made him think. He was reconsidering.

Not only so, but he decided to celebrate his birthday by gathering as many charitable donations as he could, and gathering as many people as possible! This was completely unrealistic, unfortunately, because his mental health issues make him awful company. He abuses and threatens anyone who comes near him, me included. Few can tolerate and navigate it.

To God, there are no dead men

The thing is, he was quite right about everyone being “alive to God”! All I did was state the fact, and he expounded the theological reasoning. To God, there are no dead men, and it has to do with the Resurrection, and the promises of eternal life.

So how does that work?

In an earlier post, I took a fairly exhaustive look at the reference in Hebrews 12:1 to a “great cloud of witnesses”, which is a reference particularly to the faithful who have lived in the past, but who are now dead. That article contains a lot of the theological workings and the scriptural references.

To keep it simple, however, this is how I have more recently explained it to people:

Because of this, we should consider those who have died to still be alongside us, journeying with us toward God, still part of our spiritual community. From God’s perspective, that’s what it looks like.

And the fact that the dead are raised Moses himself showed, in the story about the bush, where he speaks of the Lord as the God of Abraham, the God of Isaac, and the God of Jacob. He is God not of the dead, but of the living; for to him all of them are alive.”

Then some of the scribes answered, “Teacher, you have spoken well.” For they no longer dared to ask him another question.

Where is the hope in that?

One might well ask, “Where’s the hope in that? You’re saying there’s no difference – he might as well be dead!”

But there was hope in it. You see, he was already dead, in his view – A “dead-man-walking”, one might say. What I was saying was not “you might as well be dead”, but rather, that he might as well be alive. I didn’t need to spell it out. That’s what he got from it. He got hope for living.

Did he make it?

I am pleased to say that a couple of weeks later I was able to confirm that this fellow is still alive, now in prison (no surprises there – when I met him he had fresh charges against him, to add to a long list). He did not kill himself on his birthday, and I have every reason to believe that my conversation with him was helpful.