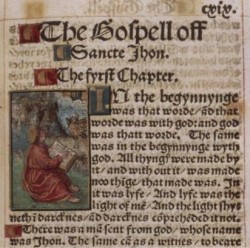 The Gospel of John: Many people’s favourite book, but scholars neglected it for centuries! 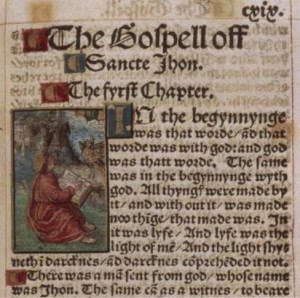 Differences between John and the Synoptic gospels are apparent in their style, vocabulary, theme, and geographic location. There are traditions unique to John, and traditions common across the other Gospels but absent from John. Among those differences however, there are also similarities including several common events and common phrases. Scholars have a number of possible explanations for this set of interrelationships. Dunn says that “the discourses [in John] in particular are best seen as meditations or sermons”,[1] and cites “elaborations” of “the historical information”.[2] It is not, however, necessary to dismiss the historicity of John to that degree.

The question of idiom and style

Dunn observes that “Jesus’ epigrammatic style”[3] is shared by the canonical Synoptics: the lamp “under a bushel”[4] expression, for example.[5] Similarly the famous parables of Jesus, which are “characterised by the skill of a brilliant story teller”,[6] are common to the Synoptics. Dunn contrasts this style with the discourses of John which are, “markedly removed from the epigrams and parables which characterise the Synoptics”.[7] He also cites the statistical content of the texts as an indicator of “qualitative contrast”[8] between the Synoptics and John.[9]

In addition, in John’s account Jesus makes three visits to Jerusalem, in 2:13; 5:1; 7:10 but only one in Mark (11:1). Stanton further observes that there are no exorcisms in John, no parables “comparable with the synoptic tradition”, not even the bread and wine tradition of the “Supper”,[10] and Carson notes, “many of Jesus’ pithy sayings” are missing.[11] Similarly, the “I am” sayings[12] are quite unique to John in content and in style.

Similarities with the Synoptics

But there are also similarities. Barrett sees at least ten events[13] listed in the same order in John as in Mark, and at least eight passages with “verbal resemblances”.[14]

Dunn makes his argument that John represents “elaboration” under the heading “Theological elaboration of history”,[15] by observing that terms like “Father” increased over the supposed time between Mark and John.[16]However, Dunn’s assertion seems to be the circular argument which Matson describes:

One of the main reasons for seeing [John] as dependent is frequently a prior assumption of lateness, hence common material can be assumed to have been gleaned from the Synoptics. But the relationship to the Synoptics is then often used to support its lateness.[17]

This Gospel has been accused, for the most of its history, as being less than “wholly historical”. In the early church, Gaius’ faction opposed canonisation of the document.[20] Eusebius also made an ambiguous reference to Clement’s description of John as being a “spiritual gospel”,[21] which subsequently was taken to mean that John should not to be understood as a primary source of historical information, and Matson says that view became tradition.[22] He says that in the 19th century, Strauss and Baur both devalued John in the developing field of critical analysis,[23] forming the “basis” for modern scholars’ views.[24] 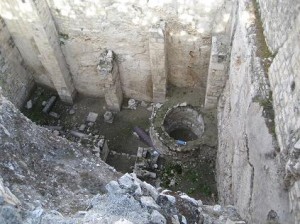 In the second century, Irenaeus defended the Gospel of John’s canonicity against what he saw as a policy of denial of the inspiration of the Holy Spirit.[25] Since the early 20th Century, obscure details, earlier thought to be inventions in the Gospel of John, have been confirmed by new archaeological evidence,[26] inviting critical re-evaluation of the whole document. The implication of the possible literary independence of John would mean “historical veracity”, according to Matson.[27]

There remain substantial differences between John and the Synoptics, however.

Dunn rejects a description of John being “wholly historical” for two reasons: (a) John’s idiom in the narrative and in the 1st Epistle is identical to Jesus’, and others’, idiom according to John, while being quite different to the Synoptic idiom of Jesus, and (b) Jesus’ self-testimony in the “I am” form is absent from the Synoptics.[28]

Both of these claims are answered by other scholars:

Firstly, Gundry acknowledges John paraphrasing Jesus, but notes that paraphrase “can communicate the intended meaning … more effectively”.[29] He refers to “sermons” as a possible source of the discourses of Jesus found in John as Dunn does, but whereas Dunn is suggesting the sermons of those who came later,[30] Gundry is saying that in this Gospel we could have sermons of Jesus himself.[31] Ladd even accounts for the “idiom” question by suggesting that John may have “deliberately cast the entire Gospel in [Jesus’ own] idiom”,[32] answering Dunn’s first criticism directly.

Secondly, Carson says, “Even the ‘I am’ statements constitute less of a historical problem than at first meets the eye”,[33] when lined up against all the expressed and implied claims of Jesus’ authority in the Synoptics.[34]

The “pool by the sheep gate”[35] discovery in modern Jerusalem is cited by Dunn, saying, “With such historical accuracy of geographical detail it is hardly plausible to argue that the whole Gospel is the creation of the evangelist’s imagination”,[36]  and yet he continues to suggest that parts of the Gospel are such a creation.[37] Dunn argues for a “theological elaboration of history”[38] but Albright says:

“there is absolutely nothing to show that any of Jesus’ teachings have been distorted or falsified, or that any vital new element has been added to them.”[39]

Why call it a-historical?

Dunn’s view has been shaped more by the discipline of critical analysis than by its findings. As shown above, Dunn rejected the claim that John is “wholly historical”, not because it is proved to be not-historical, but because he is unable conclusively to prove that it is historical. Dunn finds himself adopting a whole series of hypotheses built one upon the other, which he recommends as “middle between the other two … more extreme positions”,[40] merely because he cannot prove either one beyond doubt. He ends up with late authorship, literary dependence, and ‘theological elaboration’, none of which is necessary when his objections to “wholly historical” are answered.

Confidence in the Gospel of John

The best explanation of the similarities and differences between John and the Synoptics is firstly that their main interrelationship is a “common source”, being eye-witness accounts, reflecting literary independence. Secondly, that John’s Gospel and first Epistle are cast primarily in Jesus’ own idiom and therefore deserve theological equality, or even priority. This explanation is consistent with the internal claims of the document,[41] which scholars have questioned, but not disproved.

Dunn’s hypothesis is possible, and widely held, but additional research in the past has only strengthened John’s historicity, not weakened it. Therefore, Drane’s general principle applies: “the burden of proof must be with those who wish to deny the accuracy of the gospel accounts”,[42] rather than Dunn’s more pessimistic approach.

The Background of the New Testament and Its Eschatology. CUP Archive.

Barrett, C. K. The Gospel According to St. John : An Introduction with Commentary and Notes on the Greek Text. Philadelphia: The Westminster Press, 1978.

Wallace, Daniel B. Greek Grammar Beyond the Basics : An Exegetical Syntax of the New Testament with Scripture, Subject, and Greek Word Indexes. Grand Rapids, MI: Zondervan, 1996.

[2] “In this case too we can see something at least of the historical information on which John’s meditations and elaborations are based.” – ibid., 45.

[13] The Baptist, Departure to Galilee, Feeding of the multitude, Walking on the lake, Peter’s confession, Departure to Jerusalem, The Entry and Anointing (as one), The Last Supper with predictions of betrayal and denial, The Arrest, The Passion and Resurrection – C. K. Barrett, The Gospel According to St. John : An Introduction with Commentary and Notes on the Greek Text (Philadelphia: The Westminster Press, 1978), 43.

[14] The Baptist’s testimony, Feeding the five thousand, Jesus’ words on the lake, Peter’s confession, Triumphal entry, Jesus anointed by the woman, Jesus commends the woman, prediction of betrayal, cutting off the ear, the sign on the cross – ibid., 44-45.

[16] “the most obvious deduction to be drawn from these statistics is this: over the period spanned by Mark and John there was a development and expansion of the tradition at this point.” – ibid., 44.

[18] John 9:22, for instance, possibly referring to Jews putting Christians out of the synagogue

[20] “For Gaius, and other groups, including the Alogoi … the gospel of John represented a dangerous variant” – Matson, “Current Approaches to the Priority of John,” 4.

[21] “last of all, John, perceiving that the external facts had been made plain in the Gospel … composed a spiritual gospel” – Eusebius-of-Caesarea, “Ecclesiastical History,” (4th Century AD): 6.14.5-7.

[22] “Traditionally [John] is thought to offer little valuable or independent information” – Matson, “Current Approaches to the Priority of John,” 4.

[24] “The assessments of Baur and Strauss have either consciously or unconsciously become the basis for much [sic] of the scholarly views of the Fourth Gospel.” – ibid., 5.

[25] “that they may set at nought the gift of the Spirit … presented by John’s Gospel, in which the Lord promised that He would send the Paraclete” – Irenaeus, “Against Heresies,” (185): III.XI.9.

[26] For instance, the discovery, in the early 20th Century, of a pool that fits the description of John 5:2

[27] “If… the material is directly tied to John … then a greater willingness [among scholars] to assume historical veracity exists.” – Matson, “Current Approaches to the Priority of John,” 12.

[30] “sermons intended to draw out the significance of what Jesus did and said” – Dunn, The Evidence for Jesus, 43.

[31] “the more formal aspects of Jesus’ teaching, such as sermons … and disputes” – Gundry, A Survey of the New Testament, 256.

[37] “the truth about Jesus, but not by means of a strictly historical portrayal” ibid., 43.