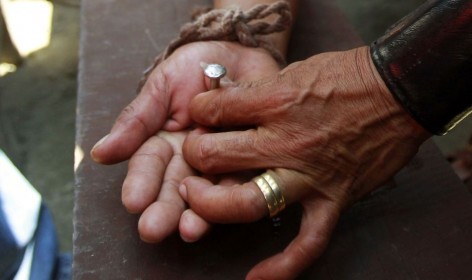 We are his “hands and feet” because we are the “body of Christ”? Oops, mixed metaphors! 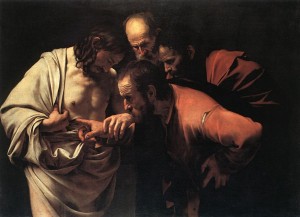 I was interested to hear someone recently suggest that we Christians are the “eyes”, “hands”, “mouth”, etc. of Christ. It’s a neat metaphor which indicates our responsibility to act, perceive and speak on God’s behalf, and to that extent I have no problem at all. In fact, I applaud it!

But he went further. He linked this idea to the statement, “we are the body of Christ” (1 cor 12:12, Eph 4:4, etc.). That was quite jarring to me. When the Bible affirms the church as “the body of Christ”, it most certainly does not mean that we are “his hands, his eyes, his mouth” in that same sense, and with good reason! He has hands and feet of his own, and they have very important scars on them.

The Body of Christ

The “body” metaphor is being used to convey the sense of unity the believers have with one another, and then corporately with the Godhead. It should be noted that in this whole passage, references to individual people representing certain bodily parts are exclusively in terms of a person being one part, and not another. Not people representing various bodily parts and functions at various times. For example:

Verses 16 and 17 contain similar rhetorical questions. The conclusion of this section is:

What we have here is precisely not what my well-intentioned friend had understood from the Body of Christ metaphor. The metaphor is designed to show that each person is one particular part of the body, and they are specifically chosen to be that one part. This is fundamentally different from the other metaphor, in which we each are “eyes”, “hands”, and “mouth” in the body. In fact, Paul even talks about some members of the body being equivalent to genitals (1 cor 12:23-24), in the sense that they would be considered shameful in the harsh public view, but treating them with modesty gives them “special honour”. Perhaps this refers to tax collectors, prostitutes, and other “unsavoury” types who are coming to faith – they do not make the church ashamed; rather, they are very precious, but not necessarily suitable as apostles! In the same way our genitals are precious, but kept private.

Aren’t we to be His hands, etc. as well?

Yes. There is a valid metaphor which describes us, the church, as being Christ’s hands, feet, eyes, mouth, etc. in the world (although this doesn’t come directly from the Bible). But the metaphor is strictly limited. Whereas we are metaphorically the hands and eyes, etc. of Christ, this is separate from the affirmation that we are “the Body of Christ”. The two metaphors do not mix.

As the hands/feet/mouth/eyes, we are vicariously living out God’s will on earth. Reflections on this could include Romans 12:1, and 2 Cor 5:20. But as “members” in the Body of Christ, we are participating in the Church. The passage 1 Corinthians 12:12-31 is similar to Ephesians 4:1-11, in that sense.

We can be doing both at once, but they are not the same thing.

Is this merely hair-splitting? Perhaps, but… this came to my attention. All I can say is that it shows where mixed metaphors can lead!

The story is that some well-meaning folks have designed a “Crippled Jesus” without hands and feet, because it is the church’s job, they say, to be his hands and feet.

“Crippled Jesus”? Stop for a minute and just think that one through…

Jesus, the one who preached and performed healings as a sign of God’s kingdom being present (Luke 7:20-23), our saviour and redeemer, depicted as “crippled”, so that we must help him…?

It is quite the reverse. He is the one who helps us. He is by no means “crippled”, does not lack hands and feet, and does not need our help. Nevertheless we are invited and included in his grand sweeping plan of redemption, and as such, we are members of his body and he is our head.

One day Peter and John were going up to the temple at the hour of prayer, at three o’clock in the afternoon. And a man lame from birth was being carried in. People would lay him daily at the gate of the temple called the Beautiful Gate so that he could ask for alms from those entering the temple.

When he saw Peter and John about to go into the temple, he asked them for alms. Peter looked intently at him, as did John, and said, “Look at us.” And he fixed his attention on them, expecting to receive something from them. But Peter said, “I have no silver or gold, but what I have I give you; in the name of Jesus Christ of Nazareth, stand up and walk.” And he took him by the right hand and raised him up; and immediately his feet and ankles were made strong.