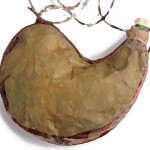 Jesus and the Wineskins: What does it mean?

Nobody seems to understand what the wineskins are about! 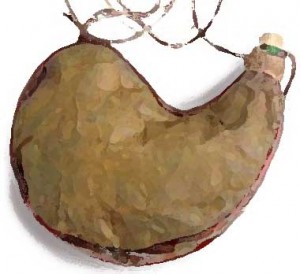 A friend asked me what Jesus was talking about when he mentioned sewing patches onto garments, and putting wine into wineskins. I didn’t know the answer, and a quick overview of the commentaries revealed that nobody else does either.

Whereas there are many teachers who profess to know what the parable means, in every case I found, the teaching produced something which contradicts other parts of the New Testament.

So I’ve worked it through below, and proposed a meaning which does not contradict other parts of the Bible. Tell me what you think.

No one puts a piece of unshrunk cloth on an old garment, for the patch tears away from the garment, and a worse tear is made. Neither is new wine put into old wineskins. If it is, the skins burst and the wine is spilled and the skins are destroyed. But new wine is put into fresh wineskins, and so both are preserved.

It’s a strange thing to say, isn’t it? So strange, in fact, that all the explanations I have found of this passage all seem to create teachings which contradict Scripture in various important ways.

Before we begin, here are some of the commentator opinions on what Jesus was supposedly talking about:

1. The old patterns of fasting are inappropriate for the fullness of the kingdom that has now arrived. – Reformation Study Bible

2. Christians ought to be considered: as the food provided for them must be such as is proper for their age (1 Cor. 3:2; Heb. 5:12), so must the work be that is cut out for them. Christ would not speak to his disciples that which they could not then bear, John 16:12.

Young beginners in religion must not be put upon the hardest duties at first, lest they be discouraged. – Matthew Henry’s Commentary

I actually agree with Henry up to the last sentence.

1 Corinthians 3:2 and Hebrews 5:12 both talk about stages of growth for the Christian, using the metaphor of breast milk and solid food. I think this is a vital part of understanding the passage. Also, John 16:12 provides a delicious tension: What else would Jesus have said if only his hearers had been able to bear it? We can only know by consulting the Holy Spirit (in the next verse).

But Henry’s conclusion is way off: Jesus did not teach that Christianity was a series of hard duties, from which beginners are exempted! Far from it. Jesus taught that mature Christianity was expressed this way:

The wind blows wherever it pleases. You hear its sound, but you cannot tell where it comes from or where it is going. So it is with everyone born of the Spirit. – John 3:8

So what Henry concludes cannot be Jesus’ intended meaning.

3. When sinners return to God through Jesus’ ministry, celebration rather than fasting is appropriate. – The IVP New Testament Commentary Series

Traditional rituals must never become a straitjacket that hinder us from celebrating sinners’ embrace of the good news of God’s kingdom. – The IVP New Testament Commentary Series

This fails because Jesus says, “The days will come when the bridegroom is taken away from them, and then they will fast.” (Matt 9:15, Mark 2:20, Luke 5:35), therefore fasting most certainly is appropriate, and Jesus did not consider fasting to be a hindrance in any way: “when you fast, put oil on your head and wash your face…” (Matt 6:17ff).

4. The patch and the new wine are images of a powerful, effervescent new relationship with God which bursts out of the dried-up confines of formal religion. – New Bible Commentary (Carson, France, Motyer, Wenham)

This one surprised me (I expected better from these experts!). Jesus most certainly did not consider formal religion to be “dried-up”! Jesus tells the people, “The teachers of the law and the Pharisees sit in Moses’ seat. So you must be careful to do everything they tell you.” (Matt 23:2-3). Jesus was very pious and observed religious festivals and rituals. He had no problem at all with formal religion. He did, however, have a lot to say about the hypocrisy that he found in it.

5. In essence, Yeshua was saying to the Pharisees, “Look, You can’t teach an old dog new tricks.” – www.bethimmanuel.org

This careful explanation compares Jesus’ sayings to a Rabbinic writing, Pirkei Avot 4:20. It concludes that the “vessels” and “garments” are people. Essentially, it concludes that once a person has learned religion there is no point trying to unteach them, and that (the essay suggests) is why Jesus chose uneducated fishermen, etc.

Jesus’ disciples were indeed new converts, and they were fishermen and others who were from outside the cultured religious social set. But far from Bethimmanuel.org’s claim, Jesus most certainly was also into teaching “old dogs new tricks”, if that’s what the old dogs needed: So it was with the Rich Young Ruler, for instance (Matt 9:16ff, Mark 10:17ff, Luke 18:18ff), and Zacchaeus (Luke 19:1-10), and countless other “repent” situations.

And it doesn’t explain Jesus’ words, “no one after drinking old wine wants the new, for they say, ‘The old is better.’” (Luke 5:39), because you see… the old wine actually is better! That’s part of Jesus’ point.

6. It is easier to fall back to what is familiar and comfortable, and justify that, rather than launch out into a life guided not by laws and regulations but led by the Voice of the Spirit of God. The two are opposites, the old and the new. You cannot combine them without destroying both.

No, Jesus, insists, the Gospel of the Kingdom (new wine) must not be hindered by the man-made rules of the Pharisees’ religion (old wineskins). – www.jesuswalk.com

Again, Jesus is referring to wine. The old is better. It’s not just that people think it’s better – it actually is. Jesus did not see Judaism as “a life guided by laws and regulations”, nor “opposite” to the Gospel of the Kingdom. In fact, when discussing the need to be born again, Jesus said to a Pharisee, “You are Israel’s teacher, … and do you not understand these things?” (John 3:10). Clearly Jesus expected Israel’s teachers already to know the Gospel of the Kingdom. And indeed they did! Every one of them was familiar with:

The Gospel message of the Kingdom was known for hundreds of years before Jesus came. What Jesus did was to announce that the time spoken of was now coming to pass (See Luke 4:21 in context).

… there are countless other examples. Simply Google “Jesus wineskins” or similar, for more.

My own view about wineskins

I mentioned above that Matthew Henry started off by hitting close to the mark. This was his opinion again:

Christians ought to be considered: as the food provided for them must be such as is proper for their age (1 Cor. 3:2; Heb. 5:12), so must the work be that is cut out for them. Christ would not speak to his disciples that which they could not then bear, John 16:12.

Young beginners in religion must not be put upon the hardest duties at first, lest they be discouraged. – Matthew Henry’s Commentary

As I say earlier, it is the last part of the last sentence which is a problem. I’m with Henry up to that point.

Judaism in the 1st Century

The Jewish religion was, by the 1st Century, both elaborate and cultured. There was a huge wealth of orthodoxy (doctrines) and orthopraxy (rituals) to comprehend, just in order to participate properly in the religion. Every single little element was rich with ancient meaning, and represented countless generations of godly contemplation. This included the detailed ritual feasts, the long liturgical prayers, even details of the clothing worn by the religious elite, such as phylacteries to hold prayer scrolls, and specially dyed tassels on their gowns. It also included hand-washing rituals. Jesus understood all of these traditions, and although he complained about the hypocrisy associated with such things in practice, he never disapproved of these religious trappings in principle.

Fasting was another example of this cultured religion. There is tremendous potential in fasting to teach us all kinds of spiritual truths, from understanding that God is the source of our true nourishment (Deut 8:3), to the overcoming of temporal discomfort (Phil 4:12). I have used fasting to teach people many different things, perhaps the most dramatic of which is to experience the call of “the flesh” in a very real way.

The Jews fasted twice a week as part of their normal observance of religion (Luke 18:12). Jesus, when he talks about wineskins, is responding to a question about why his disciples are not observing that tradition (matt 9:14;mk 2:18;lk 5:33). His answer was, in my own paraphrase:

These are new converts. If you try to make them practice fasting, they won’t understand the spiritual benefit of it and you will shipwreck their faith. Leave them alone. When they’ve matured a bit as believers, then they will be able to appreciate fasting. Besides, one day soon I will be gone and they will be in mourning. Then they will be fasting anyway!

I believe the same principle applies today. The “Seeker-Friendly” church service can be great for the new convert. Indeed, it is designed for them. But someone who has matured in their faith is ready for more. They need Bible study. They need opportunity to participate in ministry.

As they progress, the believer will naturally find their way into questions of fasting, of liturgy, of elaborate rituals, of hymns, of architecture, and all other areas where one can plumb the depths of contemplation by the Church’s earlier saints. It should be considered natural for a seasoned believer to become comfortable with fasting as they grow, but it should equally be considered natural for a new convert to be mystified by that.

The old wine of liturgical contemplation, fasting, sacrificial service, love of the least, and willingness to be poured out for Our Lord, are indeed “better”, but the seasoned believers must remember that new wine of fresh converts cannot comfortably exist in such a seasoned wineskin. To attempt it is to cause trouble, first damaging the deep rituals, and then wasting the converts. Give them a “new wineskin” and let them begin maturing. Just be careful not to place a ceiling on that maturity, because believers need to continue the maturing process so that they become the very finest of “wines”, available as a worthy drink offering to be poured out, if it should so please God.