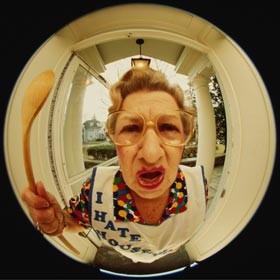 Proverbs 31: Best Wishes from your Monster-in-Law

“A capable wife who can find?” 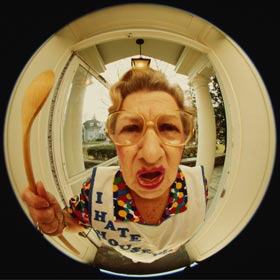 I confess that I don’t like Proverbs 31. To be more precise, I don’t like what Christian thinkers do with it.

Proverbs 31 deals, for the most part, with an idealistic description of “a capable wife”. It has, from time immemorial, been used to make wives everywhere feel inadequate and guilty. As we interpret it, it will serve us to remember who wrote it. It was “The words of King Lemuel. An oracle that his mother taught him” (Verse 1).

So what we have here is the voice of your Mother-in-Law, counselling her dearest little princeling about what to expect from the woman she would approve of. It is not the words of a prophet, pronouncing God’s will for women.

There are other passages in the Bible that should never be taken simply as instructions of example for us. Judges 19 springs to mind, for example. Some stories and passages are included as cautionary, or negative examples, or they could be drawing on cultural knowledge in a way that would reveal them as comically ironic.

When considering Proverbs 31, the most important thing to remember is that it was the words of a Jewish mother, given to her darling little heir-to-the-throne son, the apple of her eye.

Engaging with the text

The words of King Lemuel. An oracle that his mother taught him

We could just stop at that, really. What we have here is “What my mama told me”. It is not “What my God told me”.

But let’s carry on and find out what your Mother-in-Law has to say about your marriage to her dear little royal baby boy.

No, my son! No, son of my womb!
No, son of my vows!
Do not give your strength to women,
your ways to those who destroy kings.

Paraphrase of verses 2-3: Women are bad. They will bring you to ruin. Beware. Women are responsible for the downfall of kings! Keep it in your pants.

It is not for kings, O Lemuel,
it is not for kings to drink wine,
or for rulers to desire strong drink;
or else they will drink and forget what has been decreed,
and will pervert the rights of all the afflicted.
Give strong drink to one who is perishing,
and wine to those in bitter distress;
let them drink and forget their poverty,
and remember their misery no more.
Speak out for those who cannot speak,
for the rights of all the destitute.
Speak out, judge righteously,
defend the rights of the poor and needy.

Paraphrase of Verses 4-9: They will wreck your life! What was I talking about? Alcohol, right? Oh… or women… never mind, it’s the same: bad. Women=bad. Alcohol=bad.

A capable wife who can find?
She is far more precious than jewels.
The heart of her husband trusts in her,
and he will have no lack of gain.
She does him good, and not harm,
all the days of her life.

Paraphrase of vv10-12: Trust your mama. I’m sure I can find a good one for you. One who will dote on you exclusively, all the days of her life. There’s my precious little boy. Come to mama.

She seeks wool and flax,
and works with willing hands.
She is like the ships of the merchant,
she brings her food from far away.
She rises while it is still night
and provides food for her household
and tasks for her servant-girls.

Paraphrase of vv13-15: The woman I find and mould for you will get up earlier than you do to make sure breakfast is on the table, just like yo mama.

She considers a field and buys it;
with the fruit of her hands she plants a vineyard.
She girds herself with strength,
and makes her arms strong.
She perceives that her merchandise is profitable.
Her lamp does not go out at night.
She puts her hands to the distaff,
and her hands hold the spindle.

Paraphrase of vv16-19: Even though you’re a king, and your household has servants (v15), your wife will be a working woman. She will grow her own fruit, and make a business of processing and packaging it. She will stay up late at night to do this, despite needing to get up early to get your breakfast ready.

She opens her hand to the poor,
and reaches out her hands to the needy.
She is not afraid for her household when it snows,
for all her household are clothed in crimson.
She makes herself coverings;
her clothing is fine linen and purple.
Her husband is known in the city gates,
taking his seat among the elders of the land.
– Proverbs 31:20-23

Paraphrase of verses 20-23: Your wife will do all the heavy lifting of making your home respectable, while you ponce about with the big wigs, making the “important” decisions at the big end of town.

She makes linen garments and sells them;
she supplies the merchant with sashes.
Strength and dignity are her clothing,
and she laughs at the time to come.
She opens her mouth with wisdom,
and the teaching of kindness is on her tongue.
She looks well to the ways of her household,
and does not eat the bread of idleness.
Her children rise up and call her happy;
her husband too, and he praises her:
“Many women have done excellently,
but you surpass them all.”

Paraphrase of verses 24-29: Your wife will be a working mum. She will never stop working, and never take a rest, because that would be “lazy”. You and your kids will sit back and wonder how she does it, as she works herself to an early grave.

Charm is deceitful, and beauty is vain,
but a woman who fears the Lord is to be praised.
Give her a share in the fruit of her hands,
and let her works praise her in the city gates.

Paraphrase of verses 30-31: She might start out being as pretty as a princess, but she will soon work herself haggard. People will value her based on her submissiveness and her performance. When she makes all that money for the household, give her a little bit of it so she can buy herself something pretty.

My apologies to those who have aspired to be the “Proverbs 31 Woman”, but in all honesty I must declare to you that God does not require those things of you. King Lemuel’s Mama requires those things of you. God is fully content that you are a decent human being, and calls you, more than anything else, simply to enjoy his favour, his love, and his providence, in good faith.

blessed is she who has believed that there would be a fulfillment of what was spoken to her by the Lord.

Edit 2nd October, 2017: In response to a recent comment, I suggested this passage could even be satire, because it is ludicrous even in it’s contemporaneous setting. The Bible contains quite a lot of satire, not least in Jesus’ proverbs, but also, for example, in Isaiah 44, ridiculing idol worship. In Proverbs 31, a woman (a princess, no less) is being expected not only to fulfill a traditional woman’s role to an impossible standard, but also to manage property and commerce – traditionally men’s roles, to the highest standard as well, while her husband appears to have a life of ease.